″Sauerland cell″ trial opens in Duesseldorf | Germany | News and in-depth reporting from Berlin and beyond | DW | 22.04.2009

A group of men accused of plotting a series of car bombings across Germany have appeared in court at the beginning of Germany's biggest terrorism trial in decades. 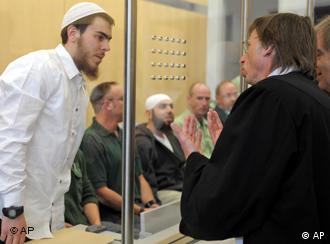 The two German-born converts to Islam have prompted fears of "home grown" terrorists.

Proceedings began on Wednesday amid tight security at the courthouse in the western German city of Duesseldorf.

Police allege the four suspects planned to use car bombs to attack US army bases in Germany in 2007, as well as bars, restaurants, airports and the Federal Prosecutors' Office. 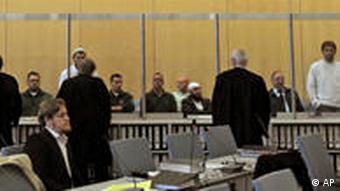 The court in Duesseldorf has been bomb-proofed for terrorism trials.

Prosecutor Volker Brinkmann said, "The defendants were driven by the will to destroy the enemies of Islam – and in particular US citizens – in Germany, on a scale of the September 11 attacks on the United States."

"German victims were also welcome," added Prosecutor Ralf Setton, reading from a 40-page charge sheet. The defendants, he said, wanted to achieve a media spectacle just as the country's parliamentarians were preparing to vote on extending Germany's troop presence in Afghanistan.

Defence lawyer Johannes Pausch said he intended to scrutinize the actions of the authorities in the lead up to the suspects' arrest.

"We have foreign witnesses whose value has to be reviewed, and we have secret service activities – that is clear in this case – which we have to examine in terms of procedures and results," Pausch said.

However, even the defence has acknowledged that prosecutors have accumulated a mountain of evidence.

Hundreds of federal agents were involved in monitoring the so-called Sauerland cell for several months, before finally swooping on the suspects in a small village in the Sauerland area of western Germany in September 2007.

The police say they caught three of the men red handed and just in the nick of time.

Police allege the men intended to strike the following month and were arrested with 26 detonators, a variety of measuring instruments, and 730 kilograms of hydrogen peroxide, among other substances commonly used to make bombs.

Hydrogen peroxide was used in the 2005 attacks on London's transport system, and the Federal Prosecutors' Office has said the men acquired enough material to make explosives significantly more powerful than those used in the London and Madrid bombings.

Especially alarming to many people is the fact that two of the suspects are German-born converts to Islam, Fritz Gelowicz and Daniel Schneider. This has prompted fears of "home-grown terrorists" and questions about how seemingly "normal" Germans could convert to Islam, become radicalized by extremist preaching, and then attend terrorism training camps for the purpose of killing their neighbors back home. 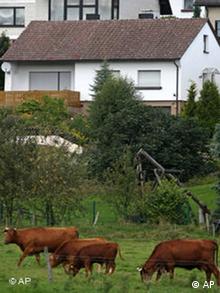 Of the other two suspects, Attila Selek is a German citizen of Turkish descent, and Adem Yilmaz is a Turkish national who was extradited to Germany after his capture in Turkey. He is accused of acquiring detonators while on a trip to the Middle East.

The men face charges of belonging to a terrorist organization, plotting murder, and conspiracy to conduct a bomb attack.

The court in Duesseldorf was purposely reinforced and bomb-proofed to host terrorism trials in the wake of the 2001 attacks on the United States.

The trial is expected to last between one and two years and, if found guilty, the defendants could face prison terms of up to 20 years.

The case has led Germany to increase security and surveillance measures for fear of militant attacks tied to German foreign policy positions.

Although Berlin opposed the 2003 US-led invasion of Iraq, Germany has around 3,700 troops deployed in Afghanistan, and hosts a number of US military bases. This has frequently been cited as a potential motivation for terrorism attacks.

The closest Germany has come to such an attack was in July 2006, when suitcases containing homemade bombs, placed on two regional trains at Cologne's main station, failed to detonate. Police say that had they gone off, they would have caused a bloodbath.

German police said they've discovered a video by a German convert to radical Islamism saying he's ready to wage jihad in Afghanistan. How typical -- and how threatening -- are converts like Eric Breininger? (22.10.2008)

A man guilty of trying to bomb German passenger trains was sentenced to life in prison. Investigators said the botched bombing could have ended in a bloodbath. The defense argued the devices were not intended to explode. (09.12.2008)

Politicians in Germany have warned of the dangers posed by Islamists, following the arrest of two terrorist suspects and a police search for two others. (27.09.2008)