More than 40 people, most of them civilians, have been killed in a Saudi-led bombing raid in southern Yemen. The strike comes a day after the coalition targeted the headquarters of ex-President Saleh. 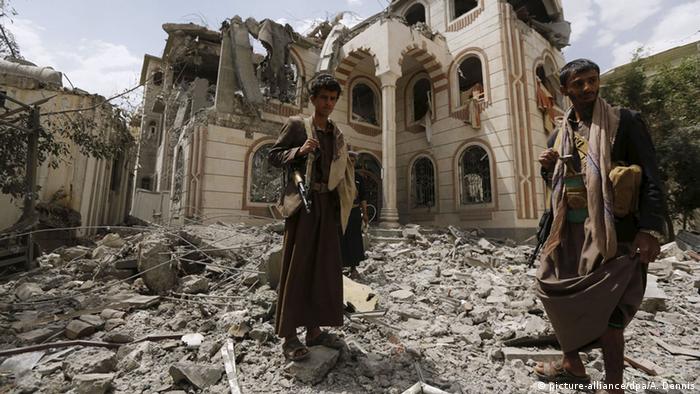 Eyewitnesses and security officials said a coalition warplane fired a rocket into a busy livestock market in the southern port city of Aden Monday, killing at least 41 people. Dozens of civilians were also wounded in the bombing in the city's Fayoush neighborhood.

"I came right after the explosion and saw dozens of dead strewn about and a sea of blood, while the wounded were being evacuated to nearby hospitals," resident Abu-Ali al-Azibi told Associated Press.

There was no immediate response from the coalition leadership in neighboring Saudi Arabia, which began bombing Yemen in March in a bid to stop the Houthi rebels from expanding their territory.

The Shiite Houthis, who are allied with forces loyal to former President Ali Abdullah Saleh, now control vast swathes of the country, including the capital Sanaa. Many of Yemen's military units are still loyal to Saleh, who ruled Yemen for more than three decades before being forced from power following 2011 Arab Spring protests. The country's internationally-recognized leader, President Abed Rabbo Mansour Hadi, is currently in exile in Riyadh.

Monday's marketplace strike followed an overnight Saudi-led attack on the Sanaa headquarters of Saleh's party, the General People's Congress (GPC). The bombing came as some GPC members were meeting the United Nations' Yemen envoy, Ismail Ould Cheikh Ahmed, in another part of the city. Cheikh Ahmed arrived in Yemen on Sunday and is seeking to arrange a pause in fighting.

In a statement on the party's website, GPC spokeswoman Faeqa al-Sayed said the attack had caused "some deaths" among employees and was "an attempt to derail the UN envoy's mission."

"This will not make us back down on our efforts ... to create the suitable environment to cooperate with the United Nations," she said.

UN-sponsored peace talks in Geneva last month failed to produce a resolution to the conflict, although both sides agreed on the desperate need for a pause in fighting to allow much-needed aid to enter the country.

Last week, the UN declared the situation in Yemen to be a "Level 3" humanitarian emergency - its most severe category - where over 80 percent of the population needs assistance.

The body says the conflict has left 20 million Yemenis without access to safe drinking water and displaced more than one million people. Nearly 3,000 people have been killed in bombing raids and fighting since March.

At least two people have been killed and several wounded after a car bomb detonated in Yemen's capital, Sanaa. The attack occurred shortly after peace talks between the country's warring groups failed. (20.06.2015)