Humanitarian group Doctors without Borders has reported Saudi-led airstrikes on a residential area in Yemen destroyed seventeen buildings and left 65 civilians dead. A Saudi helicopter crashed near the border. 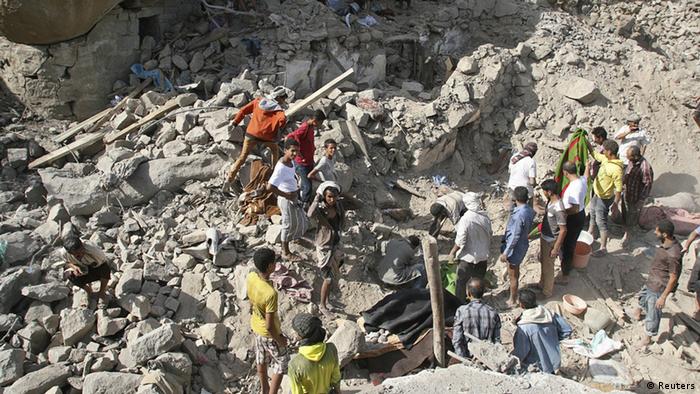 If the reports of the attack on Yemen's south west city of Taiz are confirmed, the Saudi-led strikes would be one of the deadliest since the attacks began five months ago.

Doctors without Borders said on Friday that the airstrikes were carried out on Thursday morning and rescue operations were still continuing the next morning in the Sala district of the city.

The aid organization also known as Medecins Sans Frontieres or MSF said it was unable to reach the hospitals in Taiz: "We call on the warring parties to stop attacking civilian targets, especially hospitals, ambulances and densely populated neighborhoods and allow medical personnel and humanitarian organizations to provide assistance."

Taiz is Yemen's third largest city after the capital Sana'a and the southern port of Aden. It has been the center of fighting between Houthi rebels and anti-Houthi forces over the last few days.

The Houthi rebels have been driven back in recent weeks but had been firing shells into the city for two days until Thursday. According to anti-Houthi forces the shelling stopped with the airstrikes.

"Patients and MSF staff are unable to reach hospitals due to the heavy fighting and airstrikes," MSF said in a statement, adding that 923 people have been wounded over the past three days, and that 133 of them died due to their severe injuries.

Only seven of Taiz's 21 hospitals are currently open but they are "totally overwhelmed" and have run out of essential medication, MSF said.

Also on Friday, the official news agency in Saudi Arabia said two pilots in the Saudi-led coalition were killed when their Apache helicopter came down on the border with Yemen on Friday.

In a statement carried by the Saudi Press Agency, the coalition said it was investigating the cause of the crash in Saudi Arabia's border province of Jizan.

The United Nation's World Food Programme says the conflict in Yemen has brought the country to the brink of famine. One in five Yemenis is in desperate need of aid. (20.08.2015)