Sarkozy to Attend Olympic Ceremony Instead of Boycotting | Europe| News and current affairs from around the continent | DW | 09.07.2008

Sarkozy to Attend Olympic Ceremony Instead of Boycotting

French President Nicolas Sarkozy said he would attend the opening ceremony of the Beijing Olympics in August, said media reports, ending a threat to boycott the event because of China's reaction to the Tibetan protests. 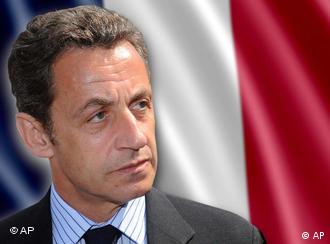 Sarkozy will represent his country as well as the European Union at the Olympic ceremony, reports quoted Sarkozy's office as saying on Wednesday, July 9. France currently holds the rotating presidency of the 27-nation EU.

The French president apparently told his Chinese counterpart Hu Jintao about his decision during their meeting Wednesday in Japan's northern island of Hokkaido, where leaders from the Group of Eight countries are discussing global issues.

Sarkozy had earlier suggested he might boycott the August 8 Olympic opening ceremony in Beijing and urged the Chinese government to open talks with the Dalai Lama.

"This is surrender in the middle of battle, an abandonment of all the commitments he made as a candidate and all the values our country embodies," the group's secretary-general Robert Menard said.

Sarkozy's decision follows a harsh warning from China's ambassador to France on Tuesday, who said there would be "serious consequences" for Sino-French relations if Sarkozy met with the Dalai Lama. The Tibetan spiritual leader is planning a visit to France next month.

Sarkozy has left open the possibility of a meeting with the exiled Tibetan spiritual leader, but any potential meeting has been sharply criticized by Kong Quan, Beijing's ambassador in Paris, as interference in internal affairs.

"The Dalai Lama is not only a spiritual leader but also and above all someone who has separatist activities and who leads a government in exile," he told reporters in Paris on Tuesday, June 8.

The Dalai Lama is scheduled to visit France from August 12 to 23 during which he will attend a conference on Buddhism in the western city of Nantes.

Relations between Paris and Beijing have been under strain for months after a chaotic Olympic torch relay through the streets of the French capital that was disrupted by protestors angry at Beijing's crackdown in Tibet.

Top European leaders, including the bulk of Europe's royals, will not attend the opening of the Olympic Games on August 8 in Beijing. The human rights controversies have caused many leaders to keep their distance. (02.07.2008)

Ignoring criticism from China and from members of her own party, Germany's development minister met with the Dalai Lama at a Berlin hotel on Monday, May 19. She called the talk "very good" and "fruitful." (19.05.2008)

Economic and political ties between Germany and China have been on shaky ground since the Dalai Lama's visit to Germany last year. But now, with the German foreign minister in Beijing, things seemed to have improved. (13.06.2008)