Police clashed with mourners in London after thousands gathered to pay their respects to Sarah Everard. A police officer faces murder charges for Everard's death.

Mourners in the UK pushed ahead on Saturday with a vigil for Sarah Everard, whose body was found days after she went missing while walking to her London home.

People gathered outdoors despite coronavirus concerns and organizers' appeals to attend an event online or light candles in their backyards and on their doorsteps. Several hundred people crowded gathered at the bandstand at London's Clapham Common, paying tribute to Everard at the park where she'd last been seen alive.

Reporting from the vigil, DW's Charlotte Chelsom-Pill said the killing struck a cord with people in the UK.

The participants decided to come out to the street to show their defiance. They were chanting that they were "reclaiming the streets," Chelsom-Pill said.

"Alongside the sadness, the emotion, there is also a lot of anger," according to our correspondent. "One woman said she is here for her children, she said that she felt unsafe as she walked the streets as a young woman — she said that enough is enough."

Police had warned that the planned gathering in memory of the 33-year-old Londoner could breach coronavirus regulations. England's current lockdown laws mean people can only leave their homes with a "reasonable excuse."

Commander Catherine Roper said London's Metropolitan Police regretted canceling the event, but that it was "the right thing to do given the real and present threat of COVID-19."

Police later tried to break up the event and detained a number of women who gathered at the Clapham Common bandstand.

"It's pretty bad really, a bunch of mostly male officers looking at a crowd of women from the center of the bandstand," Laura, 24, who did not want to give her full name for fear of reprisals, the Thomson Reuters Foundation. "We're not threatening anyone, we just want to pay our respects to Sarah."

"Women came together to mourn Sarah Everard - they should have been able to do so peacefully," he said in a statement. "I share their anger and upset at how this has been handled. This was not the way to police this protest."

Earlier on Saturday, Catherine, the Duchess of Cambridge, joined dozens of mourners to lay flowers at the makeshift memorial.

Kensington Palace said the Duchess, who is married to Prince William and still often referred to as Kate Middleton, "wanted to pay her respects to the family and to Sarah." 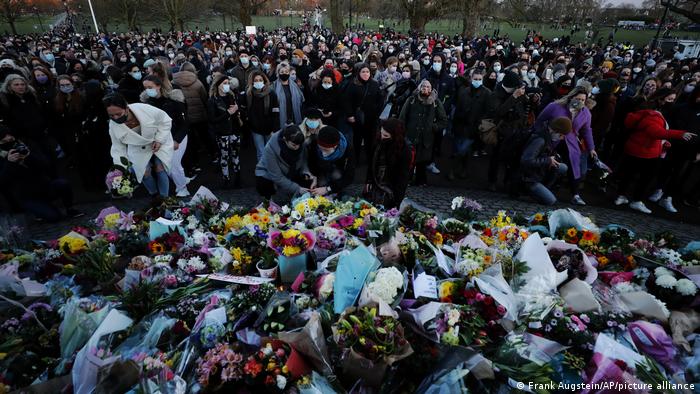 What happened to Sarah Everard?

Everard, a marketing executive, was last seen alive on March 3. She'd disappeared while walking home from a friend's house in the evening.

Her boyfriend reported her missing when she failed to make it home. 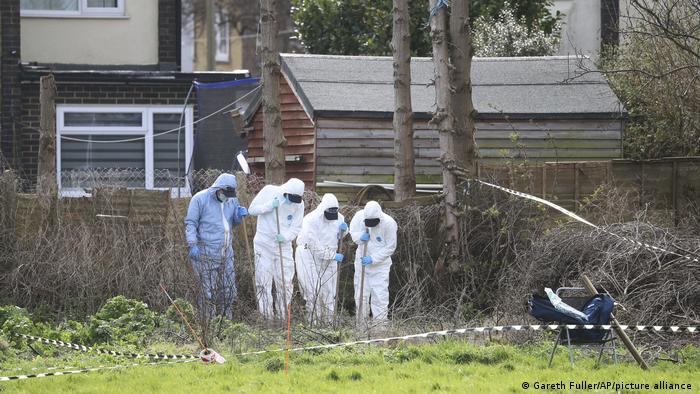 Sarah Everard's body was found in woodlands just outside London

Everard's body was later found in woods about 80 kilometers (50 miles) away in Kent, southeast England. Authorities confirmed on Friday that her remains had been identified.

A 48-year-old officer with London's Metropolitan Police, appeared in court on Saturday to face charges of kidnap and murder in the case. 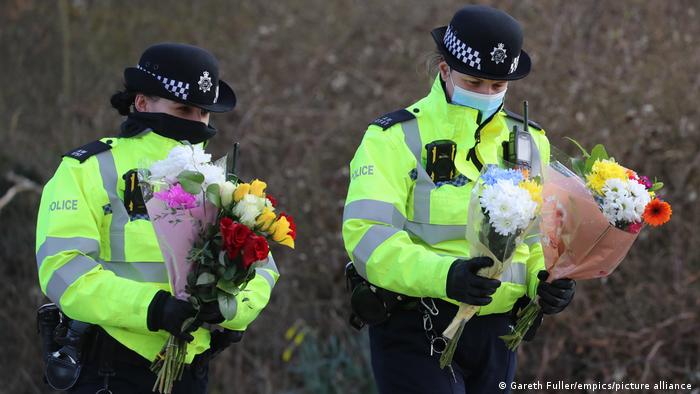 Police officers bring floral tributes, left by members of the public, to the site

He most recently served in the parliamentary and diplomatic protection command, an armed unit responsible for guarding foreign embassies and Parliament.

News of Everard's kidnapping and murder sent shock waves across the UK, prompting a nationwide debate on women's safety.