Did he jump or was he pushed? Leo Apotheker, a 20-year veteran of SAP, resigned on Sunday after just seven months alone at the helm of the business software giant. 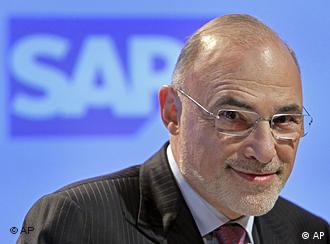 In a major management reshuffle, SAP will return to a dual-chief executive structure with two insiders sharing leadership responsibilities in the wake of Leo Apotheker's abrupt resignation.

Before becoming the company's solo chief executive, 57-year-old Apotheker served as co-CEO with Henning Kagermann from April 2008 to July 2009. He will be replaced by executive board members Bill McDermott, who is in charge of the field organization, and Jim Hagemann Snabe, responsible for product development.

The move comes as SAP, a leader in the 50-billion-euro market for enterprise software, faces increasing pressure to jump-start growth after flagging sales and profits. 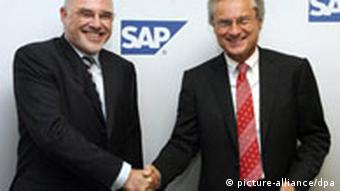 While Bahlmann admits that Apotheker took over management of SAP at a difficult time, the analyst believes the global economic crisis wasn't a key reason behind the CEO's downfall.

“There were some poor decisions, like the plan to increase maintenance fees in the middle of the economic crises and the way it was communicated,” Bahlmann said. “And there was a growing lack of employee confidence in management – especially because of some of the big layoffs.”

It's not that Apotheker can't communicate; he speaks five languages fluently – English, French, German, Dutch and Hebrew. Rather, it was the lack of a clear and cohesive strategy that displeased customers and employees alike, experts say.

Under Apotheker's leadership, SAP suffered delays in introducing new business software for small- and medium-sized companies, a market in which the software vendor has been struggling to grow for years.

The company was also slow to move into the fast-growing market of software-as-a-service. With this offering, companies don't need to buy, install and maintain software on their own computers but instead pay monthly fees to use Web-based software hosted and maintained by a provider.

In the past, SAP made most of its money selling complex, integrated business software programs, such as enterprise resource planning (ERP), to some of the word's biggest companies. More recently, the vendor has sought growth among mid-sized companies and the fast-evolving market for software-on-demand.

Hasso Plattner, the company's chairman and co-founder, is believed to have favored returning to a dual chief executive team structure similar to the one he shared with Kagermann in the past. Plattner, the elder statesman of the group, continues to play a strong role in advising SAP on technology and product development. He collaborates closely with chief technology officer Vishal Sikka, who was appointed to the company's executive board on Sunday.

In a conference call on Monday, Plattner acknowledged that the company "had lost some trust" with customers and employees, and said he was committed to restore it, beginning with changes in management style. "I will do everything possible to make SAP a happy company again," he added.

One of Germany's biggest software makers, SAP AG, has been ordered to pay $138.6 million (97 million euros) to Versata Software Inc by a US federal court. SAP was found to have violated the American company's patents. (27.08.2009)