AR-15 manufacturer Remington Arms was sued by the families of 9 victims in the grisly 2012 elementary school shooting. It is the first time a gunmaker has been held liable in a US mass shooting. 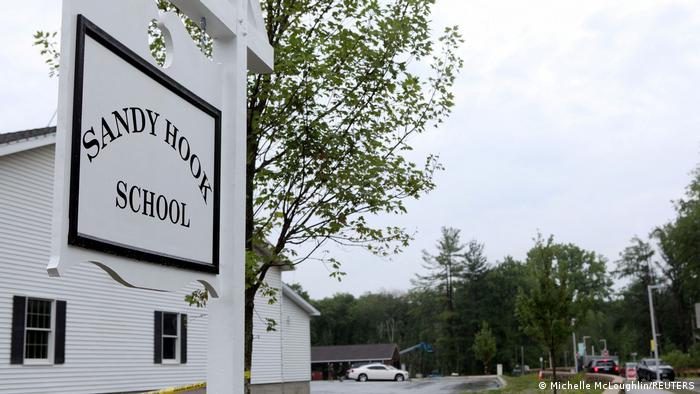 US weapons producer Remington Arms has agreed to pay a total of $73 million (€64.2 million) to the families of nine of the Sandy Hook mass shooting victims, their attorneys said Tuesday.

The company produced and marketed the Bushmaster AR-15 rifle, which was the same style of weapon used by assailant Adam Lanza when he murdered 20 first graders and 6 teachers at Sandy Hook Elementary School in 2012, in Newton, Connecticut.

The case against Remington Arms

Its the first time a gun manufacturer has been held liable for a mass shooting incident in the US.

US: Combatting the surge in gun violence

Lawyers for the plaintiffs were able to get around the legal protections for gunmakers by arguing that marketing for the weapon targeted at-risk, younger males with product placement in videogames.

The gunmaker argued that there wasn't evidence to suggest its marketing contributed to the shooting.

However, the Connecticut Supreme Court ruled Remington could be sued under state law over how the rifle was marketed.

The settlement will be paid through insurance policies, lawyers for the families said in a statement.

"These families would do everything to give it all back for just one more minute. That would be true justice," said Josh Koskoff, an attorney for the families.

Sale of the AR-15 has been highly contentious and has formed a substantial part of the US firearms debate.

Activists say military-style weapons should not be made and marketed for civilians.

US President Joe Biden praised the settlement, calling it "historic."

"While this settlement does not erase the pain of that tragic day, it does begin the necessary work of holding gun manufacturers accountable for manufacturing weapons of war and irresponsibly marketing these firearms," he added.

On December 14, 2012, 20-year old Lanza entered the Sandy Hook Elementary School armed with a Remington assault rifle, licensed to his mother, whom he had already shot dead at their home in Newtown.

After killing 20 children and six educators, he then shot himself dead with a handgun.

Lanza had been found to have severe mental health disorders and had been obsessed with previous mass shootings, including the Columbine High School shooting in 1999.

Sandy Hook is considered to be the deadliest shooting incident at an elementary school in US history.

Last year US conspiracy theorist Alex Jones was found guilty in four cases brought against him by parents of Sandy Hook victims.

Jones had for years claimed the mass shooting was a hoax.