Same-sex marriage in US: Equality through the courts? | Americas | North and South American news impacting on Europe | DW | 27.04.2015

Same-sex marriage in US: Equality through the courts?

It’s a milestone in the US movement for LGBT rights: This Tuesday, the Supreme Court will hear the arguments on same-sex marriage. DW spoke to some of the lawyers who have made this the fight of their lives. 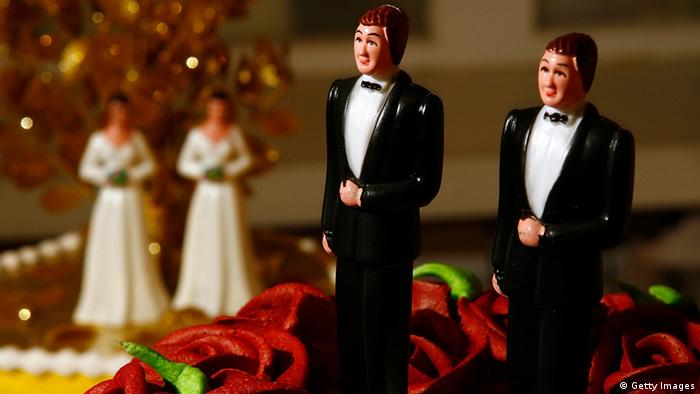 Tuesday's Supreme Court hearing will be the dramatic culmination of several cases from four states: Kentucky, Michigan, Ohio and Tennessee.

It's a weaving together of very different personal stories. In Michigan, April DeBoer and Jayne Rowse want the protections that marriage would give to their four children. They had to adopt them as individuals because their state won't allow a same-sex couple to do so.

Not far away in Ohio, James Obergefell wants recognition of his marriage to his late husband John Arthur. They married in Maryland in 2013; Ohio's ban on recognizing same-sex unions performed out of state means that Obergefell is not named on Arthur's death certificate.

Campaigners say it couldn't be clearer: states that refuse to license - or recognize - marriages for same-sex couples are denying them "equal protection of the laws" as guaranteed by the Fourteenth Amendment to the Constitution.

Sarah Warbelow is one of the lawyers making that case before the Supreme Court. She is Legal Director at the Human Rights Campaign, the largest lesbian, gay, bisexual and transgender (LGBT) rights group in the US. She told DW, "The legal arguments on behalf of same-sex couples are the superior arguments, intellectually, morally, constitutionally."

Opponents are expected argue for the rights of states to chart their own course on marriage. All four states featuring in the case passed constitutional amendments banning gay marriage after Massachusetts became the first state to allow it. All in all, 31 states passed such measures - many of which have since been ruled unconstitutional by lower courts.

Nine judges sit on the Supreme Court, but lawyers on both sides will be aiming their arguments squarely at just one: Anthony Kennedy. He is regarded as the "swing vote" between the broadly conservative and liberal camps. Most observers expect a 5-4 vote - the question is, which way?

Lawyers have been scouring Kennedy's previous decisions for clues, above all the opinion he wrote after the last same-sex marriage case to reach the Supreme Court. In US v Windsor, the court overthrew a key provision of the Defense of Marriage Act (DOMA) - a 1996 federal law defining marriage as between a man and a woman, as well as allowing states not to recognize same-sex marriages granted in other states.

Supporters of gay marriage are confident Kennedy's opinion on US v Windsor points to success for their side, particularly with a view to the interests of children being brought up by same-sex couples. In the opinion, he wrote that DOMA "humiliates tens of thousands of children now being raised by same-sex couples. The law in question makes it even more difficult for the children to understand the integrity and closeness of their own family and its concord with other families in their community and in their daily lives."

Veteran Supreme Court litigator Paul M. Smith expects a clear-cut outcome. He believes that arguments against gay marriage have become increasingly "tortured" since the landmark Supreme Court case that he won in 2003. "Lawrence v Texas" saw the court strike down Texas's sodomy laws, making homosexual activity legal in Texas and 13 other states with similar laws still on their books.

Then, too, Anthony Kennedy wrote the majority opinion. He argued, "The petitioners are entitled to respect for their private lives. The State cannot demean their existence or control their destiny by making their private sexual conduct a crime." Kennedy referred back to these arguments again in his DOMA opinion - writing that the Constitution protected such "moral and sexual choices," perhaps highlighting the importance of both precedents leading up to this year's case.

It's one reason many opponents of gay marriage are bracing for defeat. As James Dobson, who leads the conservative group Focus on the Family, put it, "In mid-2013, only 13 states had legalized same-sex marriage. Now, two years later, there are 37. And the Supreme Court seems poised to make it 50."

Looking ahead to the 2016 presidential race, presumptive Democratic nominee Hillary Clinton has been embracing LGBT rights - including gay and lesbian couples in the video on "Everyday Americans" that launched her campaign.

And while the Republican field remains overwhelmingly opposed to gay marriage, there are signs candidates don't see this as a vote-winner. Even the most ardent Christian conservative to have entered the race so far - Ted Cruz - recently attended a reception at the home of two prominent gay businessmen in New York.

With polling by Pew Research now indicating that 61% of Republicans under the age of 30 support same-sex marriage, it's another sign that times are changing.

For many, the pace of that change is astonishing. Barely a decade ago, Clinton herself told her fellow senators, "I believe marriage is not just a bond but a sacred bond between a man and a woman." Where does such rapid change come from?

Lessons for the world

What advice would these legal campaigners offer to activists in parts of the world where LGBT people live in fear of persecution?

"It really is about slow, steady progress," Warbelow said. "Changing hearts and minds. It takes a lot of courage to come out as an LGBT person when you risk being thrown in jail just for having an intimate relationship with your partner. But it is those acts of bravery that have changed the course of history in the United States."

Janson Wu, who heads the Massachusetts-based Gay & Lesbian Advocates & Defenders (GLAD), says his work is far from over. In many states, workers can still be fired over their sexuality. "We have been trying to get employee discrimination protections passed through Congress for over two decades. The majority of Americans are in support of this. What is the delay?"