Rwandan forces have driven out Islamist militants in Mozambique's gas-rich Cabo Delgado province. Their success underlines the failure of Mozambique's army, but some observers want Rwanda to say when they will leave. 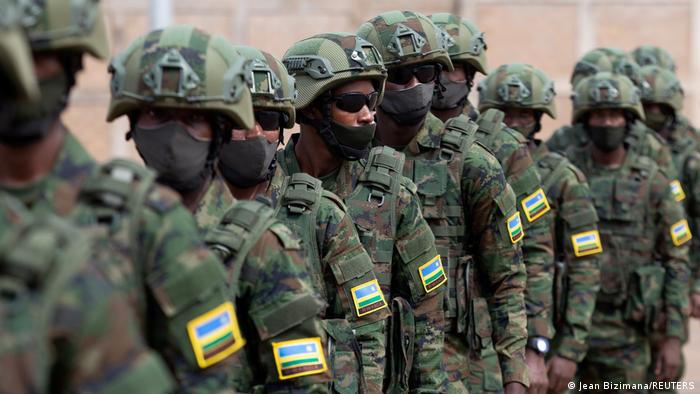 Rwandan troops have scored a major military success in Mozambique

On August 9, the Rwandan military announced it had taken the strategically important northern Mozambican port of Mocimboa da Praia from al-Shabab militants. The Kigali daily New Times quoted Brigadier-General Pascal Muhizi as saying the Rwandan army had chased out the al-Shabab fighters.

The jihadis had occupied Mocimboa da Praia in the Cabo Delgado province for over a year but fled towards Tanzania on motorcycles. Others melted away into the thick forests south of Mocimboa, Muhizi added. Around 70 militants were killed, according to Rwandan army spokesperson Ronald Rwivanga. 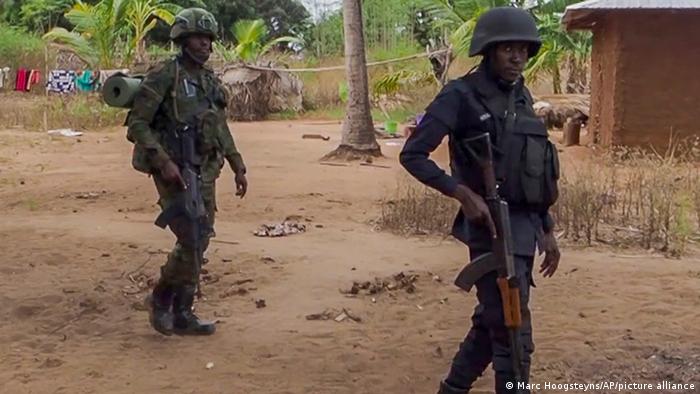 Rwanda's contingent of 1,000 soldiers is the biggest foreign force in resource-rich Cabo Delgado, which is the site of a $20 billion (€17 billion) liquefied natural gas project operated by French energy giant Total. But the area has also seen numerous attacks carried out by Islamist jihadis. The violence has uprooted more than 800,000 people.

To help bring back stability, the Southern African Development Community (SADC) has also contributed troops. But an agreement reached in June between the SADC and the Mozambican government has been hampered by some members lagging on troop commitments. Even South Africa, which was supposed to provide the most troops on a limited, three-month basis, has said it will not meet its troop commitment for "organizational and logistical" reasons. 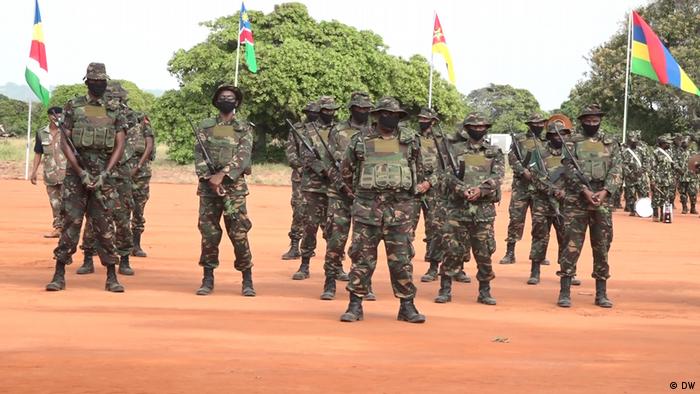 SADC forces have also arrived in Mozambique, though they have been less effective than Rwandan tropops

Rwanda, meanwhile, has used the occasion to showcase itself as the most "competent and best-organized army in Africa." According to army spokesperson Rwivanga, Rwanda takes part in more international peacekeeping missions than any African country.

Mozambican army commander Cristovao Chume told Mozambican TV that Rwandan troops achieved their objectives efficiently, adding the Rwandans encountered no major resistance, with shots fired only in a few outlying districts of Mocímboa. However, he did not answer why Mozambique's army had failed to rout the Islamists in the years before foreign troops arrived. 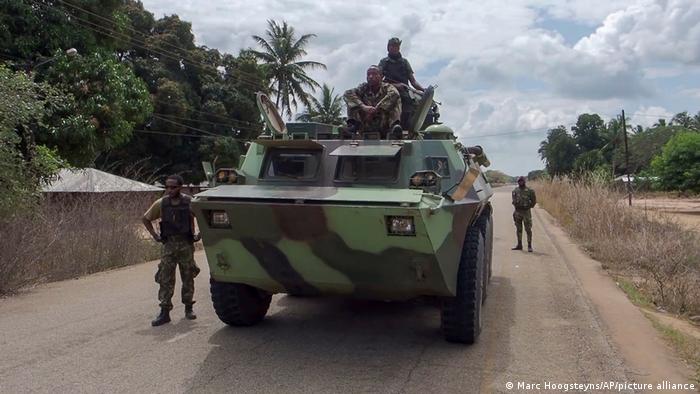 Rwanda's successful intervention has relegated Mozambican forces to bit-part roles in their own country, and this is a scandal, says Mohamed Yassine, an expert on Mozambican foreign policy. He says that the Rwandans achieved more in a few days than the Mozambican army managed in an entire year.

Yassine told DW it was only through Rwanda's successful intervention that the restarting of Total's huge gas project can be contemplated. Total halted the project in April over security concerns.

Responding to a query from Portuguese news agency LUSA, Mozambique's government confirmed that the Rwandan army had created a 50-km-long (31-mile-long) safety zone for the gas project. It also published a map showing the division of operational areas: The Rwandan army will retain control of the towns of Mocimboa da Praia and Palma, which are vital for the Total Energies project. 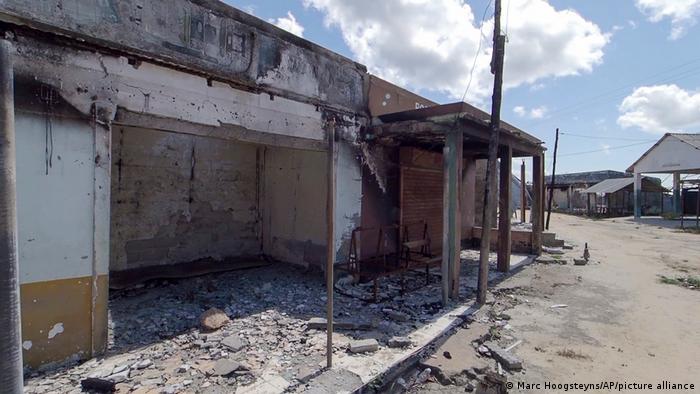 "This approach was probably negotiated at the highest political level between Mozambique, France and Rwanda," says Elisio Macamo, an expert on African politics at the University of Basel. For France, moving the biggest gas project in Africa forward is vital, and Paris was even prepared to send troops to secure its interests in northern Mozambique.

In Mozambique, though, there was opposition to allowing a French military presence in Cabo Delgado. So the solution was for Rwandan troops to fill the void and be paid handsomely from both a financial and political perspective, Macamo told DW.

For Rwandan President Kagame, the military success in Cabo Delgado is a major propaganda victory and another sign of Rwanda's increased regional military power in eastern and southern Africa.

Mozambican peace and security expert Calton Cadeado criticized the national government's inability to defend itself against outside and domestic threats, He says it could cause long-term problems if Mozambique's security forces do not manage without outside help.

"Foreign missions will have to leave Mozambique sooner or later, and we will have to defend ourselves," says Cadeado. Therefore, he says, Mozambique needs an exit strategy for foreign forces and especially one for Rwanda's departure. 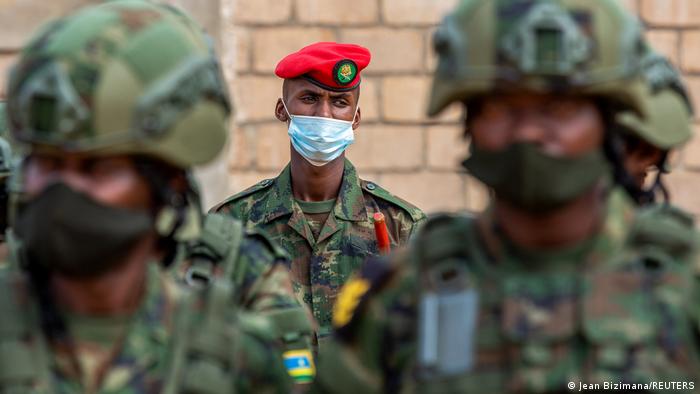 Rwanda's troops have been praised for their intervention in Mozambique

Mozambican human rights lawyer Joao Nhampossa agrees: "We need a strategy immediately for when the foreign troops leave," Nhampossa told DW. He hopes Mozambique will set up an independent commission to deal with the damage caused by the conflict in northern Mozambique and pay reparations for any human rights violations committed by domestic and foreign troops.

So far, though, Rwandan troops are not known to have committed any human rights abuses, Nhampossa explains. In fact, Mocimboa residents seem relieved at their presence and say the Rwandan troops often behave better than the national army — Mozambican soldiers have been accused of looting and causing tensions with locals.

"We're very happy with the presence of the Rwandans," a resident of Mocimboa told the internet site "Carta de Mocambique." Even after the jihadists left, Mozambican soldiers tried to seize goods. "But when we alerted the Rwandans, they intervened, and we are safe."

His conclusion? "The Rwandans bring peace."

Nadia Issufo contributed to this report, which was translated from German by Cai Nebe.