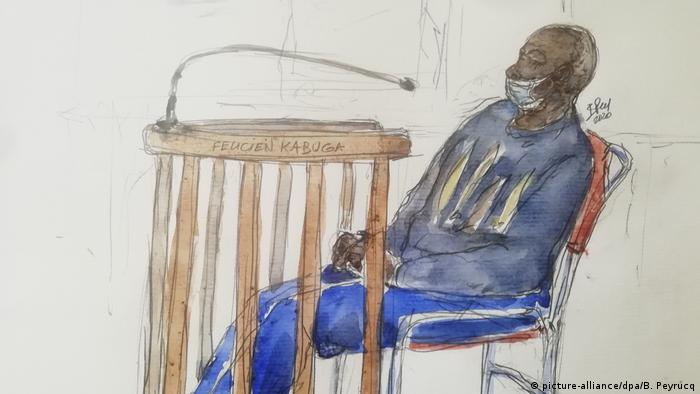 Rwandan genocide suspect Felicien Kabuga called the charges against him lies in a French courtroom on Wednesday. After the presiding judge read out the offenses that Kabuga was accused of, including genocide, persecution and extermination against Rwanda's Tutsi minority, Kabuga denied the charges.

"Those are all lies," Kabuga said through an interpreter. "I would not have killed my customers. They are lies."

Kabuga appeared before a Paris Court of Appeal that will decide whether he will be transferred to an international court. The French court refused to release Kabuga on bail, despite his lawyer's argument that he is in poor health. Kabuga appeared in court in a wheelchair, hands in his lap, wearing a face mask. No immediate medical concerns were known.

The defense lawyer said Kabuga would not receive a fair trial at a UN tribunal. The French court will determine whether he will be handed to an international court during its next session, which is scheduled for June 3.

Kabuga, who was arrested earlier this month is a Paris suburb, was considered the most-wanted suspect connected to the 1994 genocide of Tutsis in Rwanda. He had been on the run for 25 years for his suspected role in crimes committed during the Rwandan Civil War.

A tea and coffee tycoon, Kabuga was one of Rwanda's richest people leading up to the genocide.

Prosecutors have accused Kabuga of using his wealth to import machetes and gardening tools that would be used as weapons in the 100-day genocide that killed several hundred thousand Tutsis and moderate Hutus. Kabuga also co-owned the Radio Television Libre des Milles Collines (RTLM), which spread ethnic hatred against Tutsis.

Kabuga managed to evade capture for years by living under false names and frequently moving. French police previously said he lived in several European and African nations — including Germany, Belgium, and Kenya — in the quarter-century since the genocide.

The US Secretary of State Antony Blinken's visit to Africa did not achieve much in finding a solution to thorny relations between Rwanda and Congo. But his high-profile trip was probably not completely in vain.