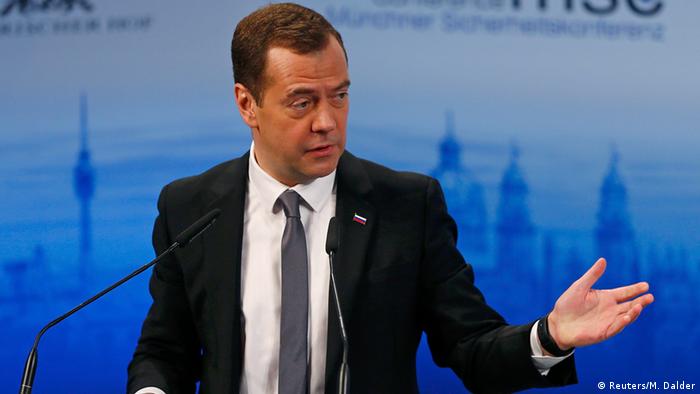 Speaking at the Munich Security Conference on Saturday, Medvedev said the world had "slid into a new period of Cold War" as differences grew between the West and Russia over conflicts in Syria and Ukraine.

"Almost every day we are accused of making new, horrible threats either against NATO as a whole, against Europe or against the US or other countries," he told delegates at the meeting in the southern German state of Bavaria.

Medvedev said, however, that in the face of the challenges currently facing the world, such as regional conflicts, terrorism and the migration crisis, Russia needed to be regarded as a partner. He added that differences between Moscow and the rest of the world were not unbridgeable.

"Our positions differ, but they do not differ as much as 40 years ago when a wall was standing in Europe," he said, and cited several instances of agreements that had been achieved since then, including on issues such as disarmament, Iran's nuclear program and piracy.

The Russian prime minister accused the West of expansionist policies toward formerly Soviet-ruled eastern Europesince the end of the Cold War, saying they were deepening the rift with Moscow.

"European politicians thought that creating a so-called belt of friends at Europe's side, on the outskirts of the European Union, could be a guarantee of security, and what's the result? Not a belt of friends but a belt of exclusion," he said.

Medvedev also called into question the sagacity of sanctions imposed on Russia by the West over its annexation of Crimea and its support of pro-Moscow rebels in eastern Ukraine, saying they damaged both sides and calling instead for global cooperation to combat what he referred to as a widening economic crisis in the world.

In response to Medvedev's comments, NATO's supreme Allied Commander General Philip Breedlove told DW that the alliance's actions are "defensive" and that they are "proportionate in size and capability."

"No one in NATO wants to return to a Cold War," Breedlove insisted.

"We are taking those actions because we have seen a nation to the east that for two decades we were trying to [become partners with], and this nation has recently demonstrated that is does not want to be a partner," he argued, adding that Russia had shown that it is willing to "use force to change internationally recognized borders."

Following his speech on Saturday, Medvedev also denied accusations that Moscow was attacking civilians in Syria as part of its military offensive there to prop up the government of President Bashar al-Assad.

Russia's military operations in Syria are a cause of concern in many Western countries, who fear that civilians and "moderate" rebels opposed to Assad's rule might be targeted. Moscow says its airstrikes aim only to combat radical Islamist forces such as "Islamic State."

Earlier, French Prime Minister Manuel Valls also mentioned Russia's bombing campaign in Syria, reiterating the accusation that civilians were being killed in the attacks. Valls said Moscow's airstrikes were an obstacle to efforts to bring peace to the country, which has been wracked by five years of civil war.

Valls also warned that European unity was under siege amid economic challenges and the difficulties posed by a massive influx of refugees and migrants, mostly coming from the Middle East and Africa. 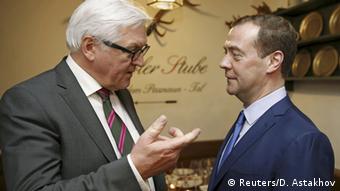 Steinmeier and Valls both stressed the need for unity

"The European project can go backwards or even disappear if we don't take care of it," he said. "If Europe doesn't show it can respond not only to economic challenges but also to security challenges, then the European project will be finished, because the people won't want it anymore."

"External crises and inner strength are obviously inseparable," he said. "We can defy the storms that are raging outside the EU only if we stand together in the EU."

The remarks come as the EU's Schengen zone, which allows free travel between member states, comes under increased threat as ever more countries close their borders in view of the number of refugees and migrants attempting to enter the bloc.

Even before it has gone into effect, a "cessation of hostilities" deal for Syria is under threat. Cracks are beginning to show as Russian bombing continues, and a Saudi diplomat promises Assad has no future in Syria. (13.02.2016)

At the Munich Security Conference, the commander of the US Air Forces in Europe and NATO Allied Operations, General Philip Breedlove said 'no one wants a new Cold War.' DW's Michael Knigge posed the question. (13.02.2016)