Moscow has strongly criticized a proposed United States initiative to station military equipment along NATO's eastern border. It would be the most aggressive act since the Cold War, a Russian defense official said. 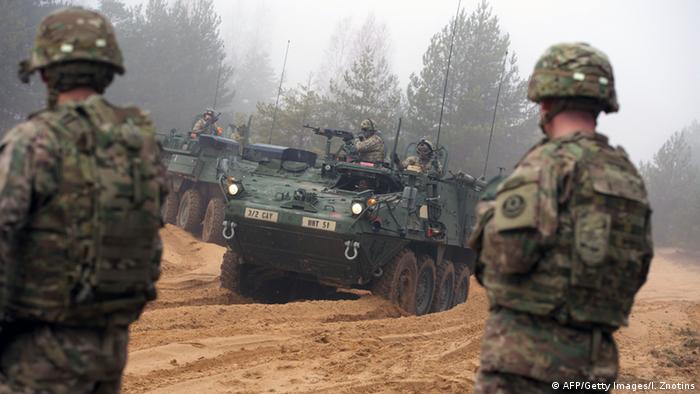 According to the Russian news agency Interfax, defense ministry official General Yuri Yakubov on Monday slammed the reported Pentagon proposal to store military equipment on the territory of some of its NATO allies - countries which were once part of the Soviet sphere of influence and are concerned they could be caught up in a conflict like the one in Ukraine.

"If heavy U.S. military equipment, including tanks, artillery batteries and other equipment really does turn up in countries in eastern Europe and the Baltics, that will be the most aggressive step by the Pentagon and NATO since the Cold War," Yakubov said.

"Russia will have no option but to build up its forces and resources on the Western strategic front," he added.

According to Yakubov, a Russian reponse would likely include speeding up the deployment of missiles to the Baltic exclave of Kaliningrad and strengthening Russian forces in Belarus.

According to Pentagon plans reported by the "New York Times" over the weekend, the US is considering storing weapons for up to 5000 soldiers in total. Enough equipment for about 150 soldiers would be kept in each of the three Baltic nations: Lithuania, Latvia and Estonia. Enough for a company or possibly a battalion - about 750 soldiers – would each be located in Poland, Romania, Bulgaria and possibly Hungary. The proposal would require approval by the Defense Secretary and the White House.

The US military is in the process of deciding where to store a battalion's worth of equipment in Europe, the Pentagon said on Monday. It was part of a long-term effort to facilitate rotational training with NATO allies in the region.

Poland and the Baltic states have expressed concern that they could be targeted by Moscow since Russia annexed the Crimea Peninsula and a rebellion broke out by pro-Russia separatists in Ukraine's east in 2014. The US and NATO accuse Russia of fuelling the conflict by militarily supporting the separatists, something Moscow has denied. According to the New York Times, the idea behind the US stationing of equipment was to reassure its eastern European allies.

While some NATO members have welcomed such a proposal, others are wary of antagonizing Moscow.

The Russian Foreign Ministry said: "We hope that reason will prevail and the situation in Europe will be prevented from sliding into a new military confrontation which may have dangerous consequences."