Russia tests advanced ICBMs by firing them from submarines

Russian submarines have fired two nuclear-capable missiles which destroyed dummy targets in remote regions of the country, Russia's military says. The test comes a day after Moscow pledged to respond to US testing. 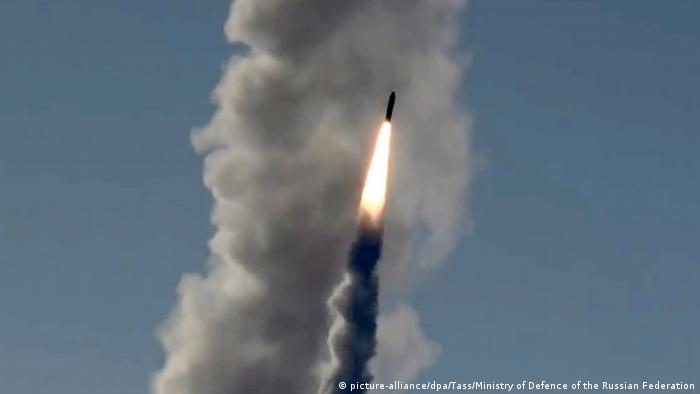 Two Russian submarines took part in an ICBM test on Saturday morning, firing a missile each, at targets in Kamchatka, in Russia's far east, and Archangelsk, in the country's north, the Russian military said.

The launch probed the capabilities of Russia's Bulava and Sineva projectiles. Both of the missiles are capable of carrying multiple nuclear warheads.

"The life-sized models of payloads completed the full launch cycle and successfully neutralized dummy targets" in Kamchatka and Archangelsk, the military said.

Sineva, a liquid fuel missile, is considered one of the most advanced missiles in Russia's arsenal. In a 2008 exercise, Sineva set a record for the longest distance flown by a ballistic missile, traveling more than 11,000 kilometers (6,853 miles).

Bulava is an even newer design, powered by solid fuel and capable of carrying up to 10 warheads a distance of 8,000 kilometers. Each of the warheads would have an individual guidance system, allowing them to change trajectory mid-flight.

Response to US test?

Earlier this week, the US and Russia clashed over the US testing of a ground-launched, intermediate-range missile. The updated version of the Tomahawk cruise missile would be banned under the now-defunct INF treaty.

On Friday, Russian President Vladimir Putin said he had ordered the military to prepare a "symmetric response" to the US test.

However, it was not immediately clear if Saturday's ICBM test in Russia was connected with the earlier Tomahawk launch.

Read more: What is Russia hiding after 'Skyfall' radioactive blast?

The submarine launches also come weeks after a blast at a missile testing site in Archangelsk, which killed at least five nuclear engineers working on a "nuclear isotope power source" for a rocket. Last year, Putin boasted that the world's first nuclear-powered missile was being developed in Russia.