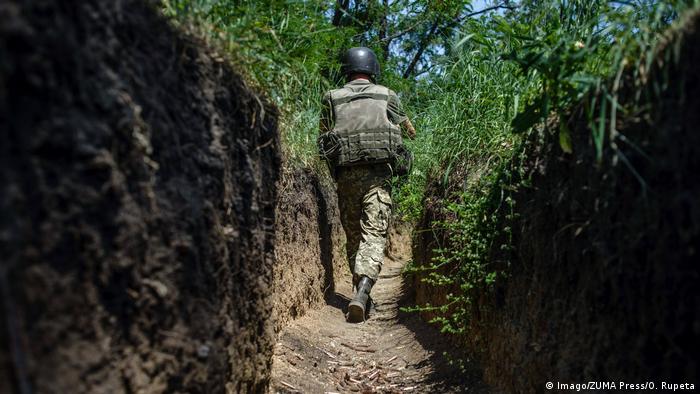 The conflict has killed more than 14,000 people since 2014, according to Ukrainian figures

The Kremlin on Sunday said it was not heading towards a war with Ukraine as tensions escalate in the eastern Donbass region.

"Of course, nobody is planning to move towards war and in general, nobody accepts the possibility of such a war," Kremlin spokesman Dmitry Peskov said in an interview to state broadcaster Russia-1.

"Nobody also accepts the possibility of civil war in Ukraine," he added.

Fears of major escalation have grown in recent weeks, with clashes between pro-Russia separatists and Ukraine's forces amid a Russian troop buildup on the borders.

What is Russia's role in the conflict?

Russia and Ukraine have exchanged accusations over the clashes. But Peskov insisted that Moscow was not involved in the fighting.

However, he said Moscow "will not remain indifferent" to the fate of the Russian-speaking populace in the region.

"Russia is making every possible effort to help resolve this conflict. And we will continue to explain this tirelessly," he said.

What about Russia's military buildup?

Ukraine has accused Russia of deploying thousands of troops on its borders.

Moscow insisted that the military buildup was a "harmless" and nonthreatening move and that it was entitled to protect Russian-speaking citizens in Donbass.

This week, Washington said the number of Russian troops at the border with Ukraine was greater than at any time since the conflict erupted in 2014.

What was the response from the West?

Washington warned of "consequences" if Russia acts "aggressively" towards Ukraine, US Secretary of State Antony Blinken said during an NBC interview aired Sunday.

Peskov said that Merkel expressed concerns, but "did not demand" the Kremlin to unwind its military buildup, which was an "internal affair."

German Defense Minister Annegret Kramp-Karrenbauer demanded an explanation of the Kremlin's intentions. "If Russia has nothing to hide, it could easily explain which troops are being moved where and to what goal," she said.

What are the latest developments in Donbass?

Ukraine announced on Sunday that a soldier was killed and another seriously wounded in an attack by pro-Russia separatists.

The Ukrainian government said 27 soldiers have been killed in the region this year, more than half of the death toll in all of 2020.

The conflict fell back with a truce in 2020. But clashes have picked up again since the beginning of the year.

Germany and France, mediators in the Russia-Ukraine conflict, have called on all sides to exercise restraint amid repeated violations of a ceasefire brokered last July.