Ruslana′s nightshift on Kyiv′s Maidan | Europe| News and current affairs from around the continent | DW | 14.12.2013

For three weeks, anti-government protesters have been demonstrating on Independence Square in Kyiv. Only the bravest stay all night when the danger of a police crackdown is highest. DW's Roman Goncharenko was there. 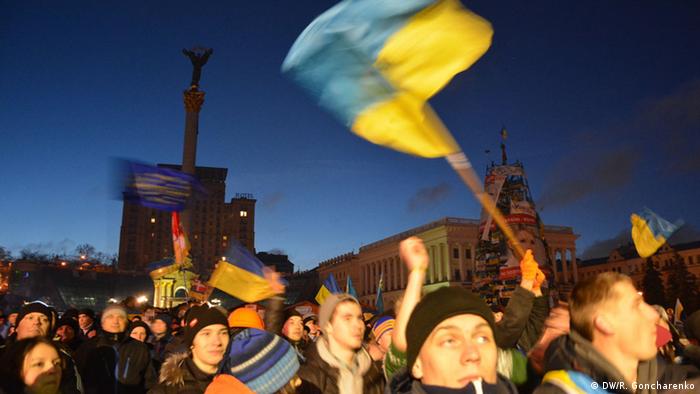 Tensions are rising. After a couple of calm days, the danger of a violent break-up of the protest camps on Maidan (Independence Square) is in the air again. Thousands of pro-government people from the east and south of Ukraine have also come to the capital to support President Viktor Yanukovych. They've been marching in large numbers, not far from the government district. And this evening, Ukrainian media reported that police forces were gathering downtown.

The self-proclaimed "National Resistance Council" is reminiscent of a beehive. People constantly come and go. Journalists, who want to enter, need to present their press pass three times. Many men wear camouflage uniforms: They're veterans of the Soviet Afghanistan war. On every corner there are free sandwiches, coffee, tea and water. In the press room on the first floor, only a few journalists with their laptops are left. 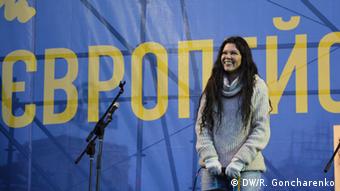 Ruslana has been a great crowd motivator

Ruslana arrives at the Council. The 2004 Eurovision Song Contest winner has been working "nightshifts" on Independence Square for the last couple of nights. When police tried to clear the square Tuesday night, Ruslana asked Kyiv residents to come downtown. Thousands followed her call and the Maidan protests were saved.

Tonight, Ruslana is wearing black sneakers, gray jeans and sweatshirt and a cropped black leatherjacket. When entering, she tells the guards, "You're the only hope."

Independence Square is packed. Roughly 10,000 people are here: young and old, men and women. The situation is a little tense, protesters expect deliberate provocations, or another outright attempt by the police to clear the area. Temperatures hover around 0 degree Celsius (32 degree Fahrenheit), but there is no snow. Many people keep close to the warming flames burning in trash cans.

Young women and girls offer sandwiches. It's surprising how well the entire venture is organized. Maidan looks like a Ukrainian Cossack camp in the 17th century: barricades, tents, fire, smoke and musicians.

Ruslana starts her shift. Organizers on stage are singing the Ukrainian national anthem and Ruslana joins in, her right hand over her heart. After that, multiple priests lead a prayer on stage. This procedure will be repeated every full hour from now on.

Next up, is Yuriy Lutsenko, former interior minister in the Tymoshenko government. Lutsenko was pardoned by President Yanukovych in April after having spent more than two years in jail. His case, just like Tymoshenko's, is considered an example of selective justice in the West. Lutsenko praises the revolution and has the people cheering. He finishes his speech with the Maidan battle cry: "Glory to Ukraine!"

The crowd has significantly dwindled by now. The back end of the square isn't barricaded and cars drive by. A garbage truck arrives to pick up the many garbage bags that were collected during the day.

Ruslana is on stage the whole time and keeps talking to the people. She yells "Maidan!" and the crowd replies "We are here!" as one. Then Ruslana addresses the men among the protesters and tells them to be ready to defend the square in case the police attack. 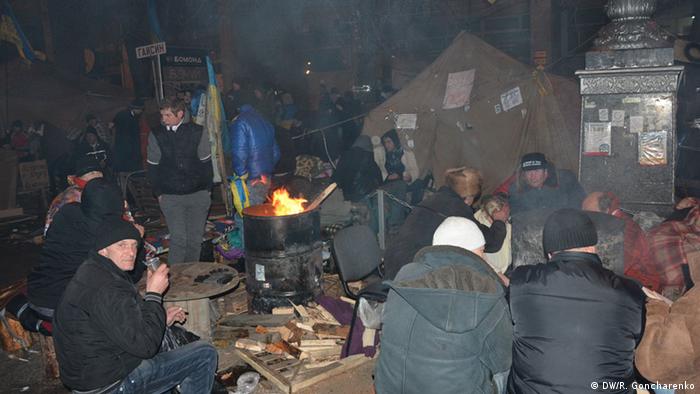 Young girls are dancing and singing folk songs on stage, wearing pink flowers in their hair. Ruslana is jumping and singing along, the crowd is waving blue-and-yellow national flags. Professional boxer Vladimir Klitschko has arrived and is clapping his hands. Then he takes the microphone. "We have a great country and we're going to be here till victory arrives," Klitschko says and shakes his fist.

Ruslana has warmed to her role of Maidan host. She's reading out text messages: a group of people left Ternopil in west Ukraine for Kyiv to support the Maidan protesters. That elicits applause from the crowd.

Just before 3 am, two women sing a song called "Vitja, Ciao." It's about President Viktor Yanukovych. Lyrics include "Neither Russia's President Putin, nor the federal prosecutors you bought, will help you." The people on the Maidan are singing and dancing. The song could become a hit.

Ruslana is doing her best. She tells jokes, dances and motivates the people to join her. "I don't want you to be cold," she says. Nighttime on the Maidan is one big Ruslana show.

But the mood is not relaxed at all. The later it gets, the more nervous even the security guards become. The fear of a police crackdown has reached a highpoint. Everyone passing through the barricades is eyed suspiciously. There are no more than 5,000 people left, sleeping in the square. Drunks are not admitted. On all of the Maidan, alcohol is an absolute no-go. Everyone's drinking only tea and coffee.

The sun is up, Ruslana says goodbye. But the crowd doesn't want to let her go, chanting "Ruslana! Ruslana!" She basically held up the crowd's morale by herself during the night. Police didn't come. Everything stayed quiet. "You have to smile," Ruslana says before she leaves. She's smiling herself. Speakers are blasting a Michael Jackson song. New protesters are flooding onto the Maidan. Change of shift.

Brok: 'No faith in Yanukovych'

Elmar Brok, head of the Foreign Affairs Committee in the European Parliament, strongly urges a dialogue between Ukraine's political forces. It is the only way for the country to get closer to Europe, he told DW.

Protests in Ukraine have highlighted the division between the country's two main Orthodox churches. One has an independent streak and is protecting demonstrators from police. The other is subordinate to Moscow.

Protests continue in Kyiv as the country becomes a center of geopolitical jockeying between the EU and Russia. But who will win? Will President Yanukovych sign the EU agreement, or will he stay in Russia's embrace?