Ruling party in Kazakhstan wins landslide in elections | World | Breaking news and perspectives from around the globe | DW | 16.01.2012

Elections in Kazakhstan have given the ruling Nur Otan party of President Nursultan Nazarbayev an overwhelming majority in parliament, further cementing his hold on the country he has ruled since independence. 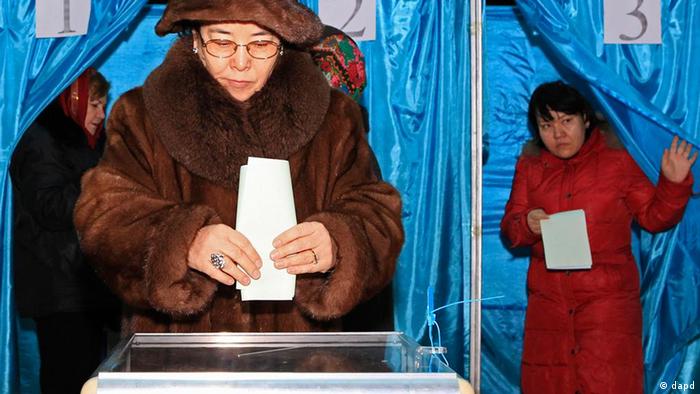 The pro-business Ak Zhol party won 7.5 percent, while the People's Communist party won about 7.2 percent. Parties must poll at least 7 percent to win any seats.

Election monitors led by the Organization for Security and Cooperation in Europe (OSCE) said the vote was less than free and fair.

"Notwithstanding the government's stated ambition to strengthen Kazakhstan's democratic processes and to conduct elections in line with international standards, the parliamentary elections did not meet fundamental principles of democratic elections," the mission said in a preliminary report.

The All-National Social Democratic Party, the only tough government critic among the seven parties competing in the election, rejected the results and said it was planning protests. A party statement accused the government of perpetrating "mass fraud" and proving its "political and moral corruption." The party won 1.6 percent of the vote.

Official figures for the Sunday poll showed a strong voter turnout of about 75 percent.

Although the election appears to have slightly broadened democratic representation in parliament's rubber-stamp lower house, Nazarbayev's most critical opponents were barred from running - a fact not missed by the OSCE mission.

"The counting and tabulation processes were significantly lacking in transparency and respect for procedure, with cases of electoral fraud noted," it added. 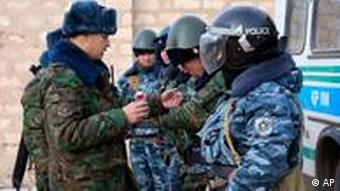 Police have increased patrols since the December riots

Tight police control oversaw Kazakhstan's parliamentary in the wake of last month's deadly riots that had claimed the lives of at least 16 oil workers. Voters in Manistau, where police opened fire on the striking oil workers, found themselves going to the polls in a snowstorm with black-clad security forces patrolling the streets.

Nazarbayev, who has been in power since independence from the former Soviet Union in 1991, remains overwhelmingly popular throughout most of his mainly Muslim country of 17 million.

The recurring campaign theme in the run-up to the election was stability above all else. Nazarbayev, as the guarantor of that, saw himself re-elected last year with a startling 95 percent of the vote.

Gap between rich and poor widening

Until recently, Kazakhstan's relative wealth had helped the country avoid the kind of violent unrest seen in other regions of the former Soviet Union. The country holds 3 percent of global oil reserves and has attracted more than $120 billion (95 billion euros) in foreign investment since independence. In 2011, the economy grew 7.5 percent.

But people have begun complaining that many have remained poor while an elite few have grown rich.

A crowd of about 30 peaceful protesters gathered on Saturday in Almaty, the country's commercial capital, and urged people to boycott the next day's ballot.

"This election," said Lilit Gevorgyan, an analyst with the think tank IHS Global Insight, "will be another missed opportunity to bring political debate into the Kazakh parliament."

Kazakhstan is gearing up for parliamentary elections expected to end the ruling party's complete control of the legislature. However, dramatic political change in the autocratic-ruled country cannot be expected. (13.01.2012)

Unprecedented riots in Kazakhstan's oil-producing Mangistau region have spread to the regional capital where hundreds of protesters have faced police troops. At least 14 people have been killed over three days of unrest. (18.12.2011)