Death toll in Kazakhstan riots rises as unrest spreads | World| Breaking news and perspectives from around the globe | DW | 18.12.2011

Unprecedented riots in Kazakhstan's oil-producing Mangistau region have spread to the regional capital where hundreds of protesters have faced police troops. At least 14 people have been killed over three days of unrest. 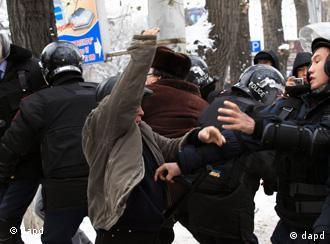 Kazakhstan's president has declared a state of emergency

Protests in Kazakhstan's Mangistau province spread to the region's capital of Aktau on Sunday, with about 500 angry protesters gathering near the main square to face a large force of riot police. The fresh demonstrations come a day after rioters blocked a passenger train and vandalized a village before police reportedly opened fire, killing one person and wounding 11 others.

Kazakhstan's Interior Minister Kalmukhambet Kasymov said on Sunday that live firearms would continue to be depolyed against protesters if necessary.

The violence began in the western city of Zhanaozen on Friday when sacked oil workers and sympathetic citizens stormed a stage set up in the town's main square to mark the 20th anniversary of Kazakhstan's independence. They later set fire to the city hall and the headquarters of the local oil company. Workers in Zhanaozen and other cities in Mangistau had been striking for months for higher wages.

A 20-day state of emergency was declared on Saturday and the town has been virtually cut off from communication, with phones disconnected, radio equipment prohibited and access to and from the city restricted. 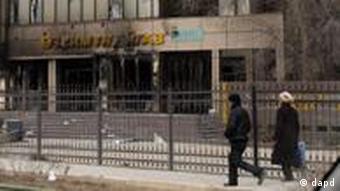 UzenMunaiGas' headquarters was one of several buildings set alight

"We want them to take away the troops," one of Sunday's protesters told news agency Reuters. The welder had been fired from the oil company Karazhanbasmunai (KBM) after working there for 20 years. "They killed local people."

The offical death toll from Friday's clashes has risen to 13 and around 100 others are thought to have been wounded. Eyewitnesses have claimed, however, that the death toll could be considerably higher.

Kazakh president sworn in for a fourth time

The veteran president of Kazakhstan Nursultan Nazarbayev has been sworn in once again after winning elections that were not considered 'free and fair' by a landslide. He has retained as his prime minister Karim Masimov. (08.04.2011)

Kazakhstan has come under fire for the poor state of its democracy and shoddy human rights record. But that hasn't stopped it from hosting the first OSCE summit in more than a decade in its glittering capital of Astana. (18.11.2010)