Brazilian President Dilma Rousseff's impending impeachment has stalled after the speaker of the lower house of Congress annulled a vote by MPs to launch the process. The on-off saga still has legs to run. 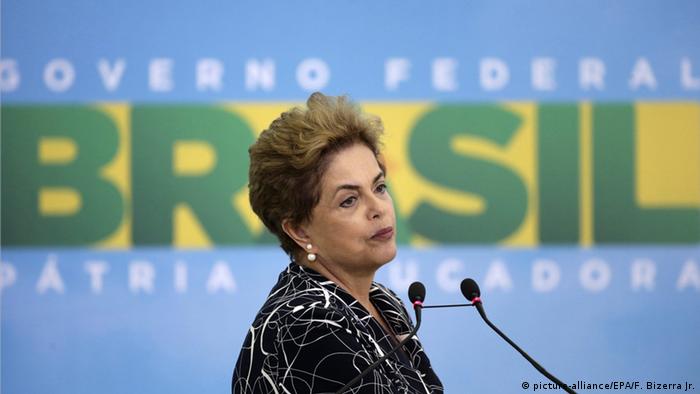 The Senate was due to start its own voting process on Wednesday with a majority expected to vote for Rousseff to be suspended, which would immediately make her ineligible to continue as president for the duration of a trial that could last six months. During this time Vice President Michel Temer would replace her as acting president.

The lower house voted in mid-April by a large majority to send Rousseff's case to the Senate for trial. She is accused of illegally manipulating government budget accounts during her 2014 reelection battle.

A law unto herself?

A new vote should take place on whether to impeach Rousseff, Waldir Maranhao, interim speaker of the lower house, reportedly wrote in an order which said that MPs should hold a new vote in five sessions' time. It is not clear if Maranhao's order will be challenged, possibly in the Supreme Court.

Maranhao - who took over as acting speaker last week - said there were procedural flaws in the April 17 vote in the chamber that accepted impeachment charges against Rousseff.

Rousseff interrupted a speech Monday to supporters to say that she'd just got unconfirmed news of her impeachment hitting a roadblock. "I don't know the consequences. Please be cautious," she said.

Rousseff, who denies wrongdoing, has been fighting for her political survival for several months as opposition congressmen push aggressively for her ouster.

Analysts described a committee's recommendation for an impeachment trial as the last formal stage before a Senate vote on the Brazilian president's future. Rousseff is accused of manipulating government finances. (06.05.2016)

Reports said Brazil's state attorney wants President Rousseff questioned for allegedly trying to stall a corruption investigation. She insisted the scandal would not affect the Olympics as she set off the torch relay. (04.05.2016)