With both Portugal and Austria winless in the European Championship, both sides were looking to get off the mark in Paris, but Ronaldo's penalty summed up Portugal's night. 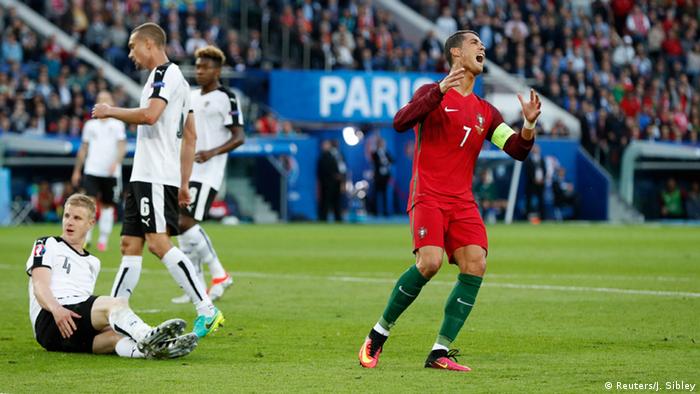 Cristiano Ronaldo missed a late penalty as Portugal spurned the chance to secure their first win of the European Championship, with Austria holding on for a goalless draw in Paris.

A lively first half saw Portugal craft the best chances, with Nani heading against the post when he should have scored, and Ronaldo sending a subsequent header straight at Austria goalkeeper Robert Almer.

Portugal were starting to extert their dominance and the best chance of the half fell to Ronaldo again, but the Real Madrid star could only sidefoot his shot wide of the near post after Portugal had sliced through the Austrian defence with ease.

Despite being pinned inside their own half for long periods, Austria also created some openings and Martin Harnik’s header from close range should have been steered in at the far post, but the Stuttgart striker could only nod it wide.

Another key chance for Austria came late in the first half when David Alaba swung a venomous free-kick towards goal from an acute angle, which Vierinha impressively headed off the line.

It was more of the same in the second half, with Ronaldo almost squeezing a long-range shot inside the near post from distance, but Almer got across well to turn it around the post.

As the game edged towards the final 10 minutes, Ronaldo found himself at the centre of two key flashpoints. 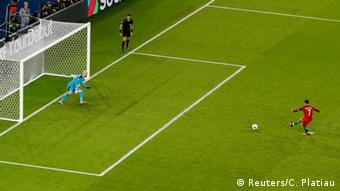 In the 79th minute he was wrestled to the ground by Hinteregger in the box, and the perfectly placed referee pointed straight to the penalty box. Ronaldo stepped up to convert from 12 yards, but saw his spot-kick come back off the left post after sending Almer the wrong way.

With the Portugal fans enduring a rollercoaster of emotions in the Parc des Princes, Ronaldo thought he’d attoned for his miss by heading in the winning goal five minutes from time, but Portugal’s celebrations were cut short as the assistant referee had his flag up for offside, with replays showing it was the right call.

Portugal continued to push for a winner but a resolute Austria defended for their lives and secured the point they need to keep their Euro 2016 hopes alive. A win against Iceland in their final game should be enough to take Austria through, while Portugal will go up against Hungary in Lyon on Wednesday.

In a rather underwhelming game Hungary and Iceland were forced to accept a point apiece in Group F. The result means Iceland will need at least a point in their final game, while Hungary are on the brink of the last 16. (18.06.2016)

Belgium coach Marc Wilmots was under pressure following defeat by Italy, but Romelu Lukaku delivered with a second half double as Ireland crumbled in Bordeaux. Belgium slide up to second in Group E as a result. (18.06.2016)

The biggest talking points from the second round of group stage matches at Euro 2016 all in one place. Here is what you should take from all of the football since Wednesday. (18.06.2016)