Italy has said the European Central Bank’s approach to reducing non-performing loans in the EU is problematic. The country's banks have the most bad loans in the bloc and Rome wants a slow reduction. 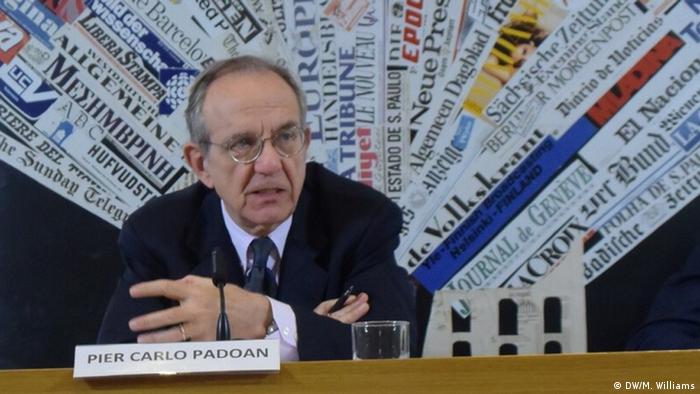 The ECB - in charge of supervising eurozone banks - will ask them as of 2018 to set aside more cash to cover newly classified bad loans.

It is also expected to present new measures to tackle the sector's large stock of bad debt of almost 1 trillion euros ($900 billion).

But not all member states want any radical solutions. Led by Rome, some of the more fragile and exposed banking systems are advocating a gradual easing out of the impasse.

"It's clear in Italy there is a problem in terms of reducing bank bad loans,” Italy's Finance Minister Pier Carlo Padoan (above) said, but added that he had doubts about the content of the communication put under discussion by the Single Supervisory Mechanism (SSM).

Bad loans have been stuck on banks' balance sheets and are holding back lending, a headache for the ECB as weak credit growth offsets some of the stimulus it is trying to provide through low interest rates.

As of January 1 banks will have a maximum of two years to set aside funds to cover 100 percent of their newly classified non-performing unsecured debt and seven years to cover all secured bad debt.

But the ECB move may be slowed by similar legislative proposals which the European Commission could put forward next year to tackle non-performing loans (NPLs).

The EU executive, the European Commission, is set to outline a list of measures on Wednesday that it intends to propose by spring 2018 on reducing bad loans held by European banks.

The European Parliament, meanwhile, has said the strategy to tackle NPLs should be devised through a regular legislative process, rather than decided by the ECB unilaterally.

Banks have also voiced concerns about plans to give supervisors more powers and warned against measures that could be excessive and unduly increase costs.

The Commission will say, news agencies have reported from a draft document, it may propose changing banking rules "with regard to the possible introduction of minimum levels of provisioning which banks must make for NPLs."

The document says the possible measures "will prevent the build-up and potential underprovisioning of future NPLs stocks across member states and banks via time-bound prudential deductions from own funds."

EU legislative proposals require the backing of EU states and parliamentarians. The 28 EU states agree in principle on the need to reduce bad loans but have different views on how fast to address the problem. It usually takes several months or years before rules are finally agreed and enter into force.

The Commission's vice president Valdis Dombrovskis declined to comment on the matter in a news conference on Tuesday.

"I can only support the ECB with its position. A large majority of European finance ministers also supported (ECB chief Mario) Draghi on this point," Germany's outgoing Finance Minister Wolfgang Schäuble said after a meeting of finance ministers in Luxembourg on Tuesday.

After previously sparking a mini tantrum in financial markets, the ECB has tried to play a balancing act, emphasizing improved growth while tempering expectations to avoid triggering serious market volatility. (20.07.2017)

The French President Emmanuel Macron has laid out his vision for a more federal Europe. We look at what he wants and and the chances of it being executed in the face of German reluctance. (26.09.2017)