The vehicle belonged to Marco Doria, a local official responsible for restoring parks and who has, according to reports, received threats in the past. Mayor Virginia Raggi has expressed her "full solidarity." 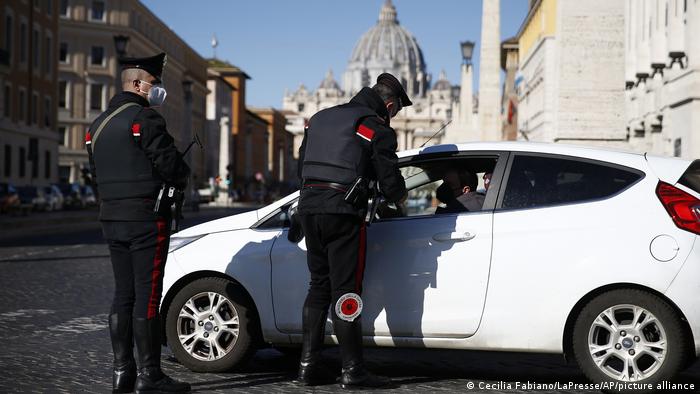 Officers stop a car at a roadblock in Rome

Rome police on Wednesday defused a bomb found on the parked car of a local politician.

The bomb was found just two kilometers (1.2 miles) from the Stadio Olimpico, where a few hours later the Euro 2020 match between Italy and Switzerland kicked off, though it appeared Marco Doria was the target of the thwarted attack.

The bomb squad was called to a residential neighborhood in the Italian capital on Wednesday afternoon after someone noticed suspicious wires on or inside the vehicle, domestic media reported, citing police sources.

The street was subsequently blocked off and experts defused the homemade explosive, which was hidden in an aerosol can.

Human trafficking: On trail of Nigerian mafia in Italy

"A bomb was found in the car of Marco Doria, president of the working group for the redevelopment of parks and historic villas in Rome," Mayor Virginia Raggi said on Twitter. "A very serious event, I express my full solidarity."

Doria had already been placed under police protection due to prior threats, according to reports.

Though authorities refused to speculate on the motive, television channel TGcom24 said the intimidation related to his denunciation of illegal squatting in historic buildings, and damage to statues and fountains.

Rome prosecutors have opened an investigation.

Around Mount Etna in Sicily, you can really get a sense of the power of nature especially as the majestic volcano could erupt at any time. A risk we took into account for part 15 of our series "Extreme Places".

The fishermen's families will receive $400,000 in compensation, each. But the Italian marines accused of killing Indian fishermen are not done with the courts yet.