The Romanian government has promised a referendum on tougher punishment for rape and murder. The move came after mass demonstrations in Bucharest over the slow response to the killing of a teenager. 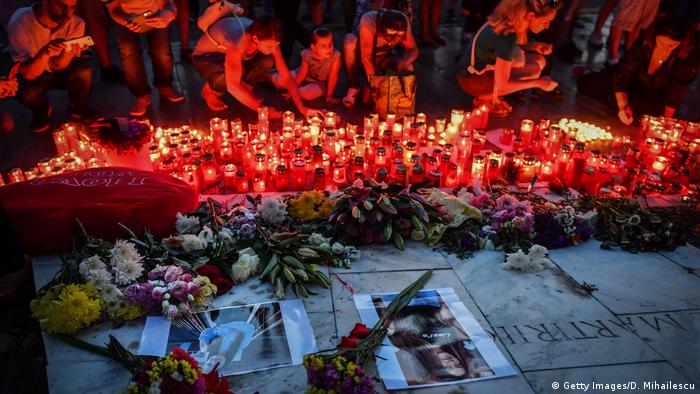 The Romanian government is considering holding a referendum to institute harsher penalties for murder, rape and pedophilia, after mass protests in Bucharest against the authorities' handling of the killing of a 15-year-old girl.

Prime Minister Viorica Dancila also called for efforts to reduce the authorities' reaction time in similar cases, after police only arrived 19 hours after the girl made repeated phone calls to the country's emergency number.

Romania's national police chief Ioan Buda, along with two county officials, was fired on Friday over the case, but about 2,000 people still took to the streets of the Romanian capital on Saturday evening, accusing officials of "indifference … incompetence and lack of empathy," according to an organizers' statement.

A 65-year-old mechanic, named Gheorghe Dinca, has been arrested as a suspect in the killing, pending a criminal investigation into charges of rape, murder and trafficking minors.

According to Romanian police, the teenager, who has not been named, called emergency services three times on Thursday morning saying she had been raped and kidnapped by a man who had picked her up while she was hitchhiking home.

But it was only 19 hours later that police searched Dinca's property in the southern city of Caracal, where they found the remains of two young women: suspected to be the 15-year-old and an 18-year-old who had gone missing in April.

Romanian authorities have said that police initially struggled to locate the source of the emergency calls and were also held up waiting for a search warrant to be issued.

Some EU states believe US gas exports are good but those of Russia less so. What happens if prices dictate US exports to go elsewhere? At the European Economic Forum this was controversially discussed, says Jo Harper. (16.05.2019)

A German PhD student was mauled and bitten by a female bear while hiking in the Romanian mountains. He managed to drive the animal away after his girlfriend told him to "punch it in the eye." (11.06.2019)