President Traian Basescu has been re-elected in a neck-and-neck runoff against challenger Mircea Geoana. But his rival's party says there has been election rigging and will contest the result. 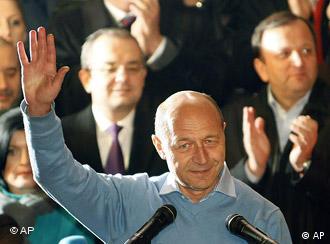 Basescu has won praise for shepherding Romania into the EU

Basescu scored 50.37 percent versus 49.63 for his rival, final results from the Romanian Central Election Bureau showed.

But Geoana's Social Democratic Party said it had proof of fraud and would contest the result. 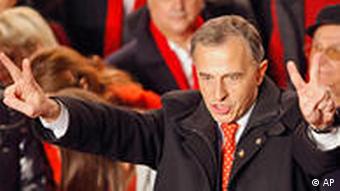 Basescu was up against main rival Mircea Geoana

One of the practices it complains of is "electoral tourism," in which individuals vote in more than one polling district.

"We have proof of fraud," senior party member Liviu Dragnea told a press conference. "The exit poll, the large number of anulled votes... massive electoral tourism and other things obviously forced us to contest the result."

"Romanians voted for Mircea Geoana, but Basescu's state apparatus is trying to make him the winner through fraud," Dragnea said.

Election observers from the Organization for Security and Cooperation in Europe (OSCE) said that the election, the second round of voting in the presidential contest, had met its requirements. However, they urged authorities to investigate the complaints.

“The conduct of the second round confirms our initial assessment that this election was generally held in line with OSCE commitments,” said Vadim Zhdanovic, head of the OSCE mission.

The two contenders, both in their fifties, came out neck-and-neck in the first round of voting two weeks ago, with Basescu winning 32.44 percent of ballots and Geoana 31.15 percent.

The November 22 presidential election was the first since the country joined the European Union in 2007.

One of the first tasks for the new president will be to appoint a prime minister, as the country has been in the hands of a caretaker government since the fall of the coalition between Basescu's Liberal Democrat Party (PDL) and Geoana's Social Democratic Party (PSD) on October 1. 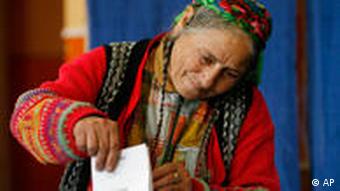 Romanians have been living under a caretaker government since October

The International Monetary Fund, the European Union and the World Bank, which in March agreed on a 20-billion-euro bail-out plan for Romania, demanded that Romania take swift steps to cut public spending amid the recession.

In response, Basescu pleaded in his campaign for "accelerating reforms" to reduce public expenditures.

Although Basescu's governing PDL is somewhat isolated following the agreement between the left-wing social democrats and the liberals, he insists that the party will be able to find allies to form the future government.

On Friday, Basescu appealed to liberals for support, saying Romania needed a right-wing coalition government to "bring it out of both political and economic crisis."

Romanians are going to the polls in a tight presidential election amid skepticism that it will resolve months of political crisis, stalled reforms and persuade international lenders to resume aid. (22.11.2009)

Romania's communist regime crumbled in December 1989, and dictator Nicolae Ceausescu and his wife were executed on Christmas Day. Two decades on, DW correspondent Zack Baddorf asked Romanians to reflect on the changes. (21.11.2009)

EU subsidies to Romania may be a blessing for the economy, but for rural life they're a curse. Unemployment is skyrocketing and traditional architecture is disappearing at an alarming pace, writes DW's William Blacker. (22.11.2009)

French President Emmanuel Macron and Commission President Ursula von der Leyen voiced support for rewriting the bloc's treaties during a conference on the EU's future that was dominated by the war in Ukraine.

In the central Romanian city of Targu Mures, a former archaeologist and political newcomer is seeking to heal ethnic divisions and clean up corruption and mismanagement.

Living in a sea of trash: Roma fight environmental racism in Romania 05.09.2021