Romanian minister sacked for insulting protesters | Europe| News and current affairs from around the continent | DW | 23.01.2012

Romania's prime minister has sacked his foreign ministers for criticizing anti-government protesters. While there has been sporadic violence, the protests against government austerity measures have been mainly peaceful. 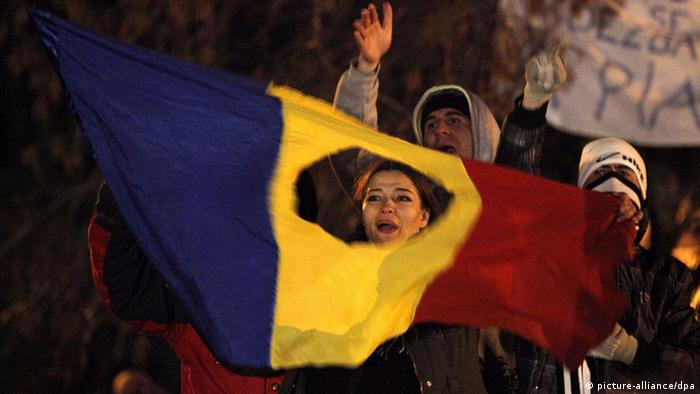 Protests have been mainly peaceful

"I have taken the decision to recall Foreign Minister Teodor Baconschi and have forwarded a proposal to the Romanian president to remove him from his functions for the comments he made," Boc told lawmakers in Bucharest on Monday.

"I sincerely regret the gaffes made by some of my colleagues regarding the demonstrators," Boc added. "I apologize to all Romanians, and I have decided to sack Foreign Minister Teodor Baconschi for his remarks."

Bloc was referring to a statement Baconschi made on his blog last week in which he described some of the protesters as "clueless and inept slum dwellers." He also compared the demonstrations to the riots in London in 2011.

There has been a series of anti-government demonstrations in the Romanian capital over the past 10 days. The protesters have been calling on President Traian Basecu and his government to resign over a package of austerity measures, which includes a cut of 25 percent to civil servants' salaries and a tax increase.

The government says the measures are needed to keep an International Monetary Fund aid deal on track.

Most of the rallies have been peaceful, but there has been sporadic violence. One demonstration that did turn violent last weekend saw more than 50 people injured clashes between police and protesters.

Frustrated Romanians have been marching in Bucharest and other large cities for several days, armed with a growing list of grievances. Government officials have called for calm, but there's no end in sight. (17.01.2012)

Romania's prime minister has called for calm after violence between police and demonstrators over austerity measures. The government has withdrawn controversial health reforms and called for dialogue. (16.01.2012)

Romania wants to join the eurozone - despite crisis

Romanian President Traian Basescu has affirmed his country aims to join the eurozone by 2015. A strict austerity program should pave the way. (11.11.2011)