British engineering firm Rolls-Royce says it has located the source an engine fault that prompted serious safety worries. An engine fire aboard one Airbus A380 caused the world's biggest passenger plane to be grounded. 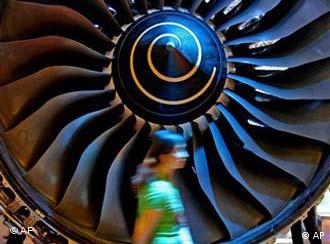 British jet engine maker Rolls-Royce claims to have pinpointed a fault that forced a Qantas A380 to make an emergency landing after a midair engine failure.

The company has said it will be able to fix the problem in collaboration with the European Aeronautic, Defense and Space Company (EADS), the parent company of A380 manufacturers Airbus.

The fault, limited to the Trent 900 jet engine, is believed to have started an oil fire that led to the Qantas engine explosion and the grounding of A380 super-jumbo jets.

"The failure was confined to a specific component in the turbine area of the engine," Rolls-Royce said in a statement on Friday. 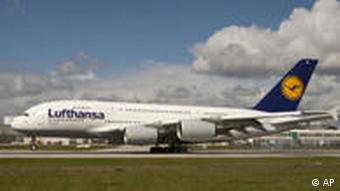 Lufthansa grounded an A380 after the Qantas failure

"Our process of inspection will continue and will be supplemented by the replacement of the relevant module according to an agreed program."

Company Chief Executive John Rose said that the firm regretted the disruption that had been caused, but welcomed the news that the fault was limited and could be fixed.

"This will enable our customers progressively to bring the whole fleet back into service," said Rose.

Following the midair engine problem near to Singapore on November 4, Qantas grounded its entire A380 fleet.

Meanwhile, Lufthansa took one A380 out of service and Singapore Airlines grounded its A380s for a refit.

Both EADS and Rolls-Royce shares slipped as a result of the fault. Airbus warned airlines and investors on Friday that the problem could lead to a delay in aircraft deliveries this year.

A Qantas Airbus A380 was forced to make an emergency landing in Singapore after experiencing engine trouble. It is one of the most serious safety incidents to date for the world's largest passenger plane. (04.11.2010)

A380 superjumbo sale gives much needed boost to Airbus

The European planemaker Airbus has been celebrating the sale of 32 A380 superjumbos to the Dubai-based airline Emirates. But at least 500 of them will have to be sold before Airbus can make a profit on the plane. (09.06.2010)

A German loan for the Airbus A350 jet project has attracted criticism from rival manufacturer Boeing. Germany said it would make more than a billion euros available, a day ahead of an international ruling on subsidies. (23.03.2010)