Five rockets have targeted an Iraqi air base hosting US soldiers, wounding two foreign contractors and three Iraqi soldiers. It's the latest attack coinciding with tensions between Baghdad's allies Tehran and Washington. 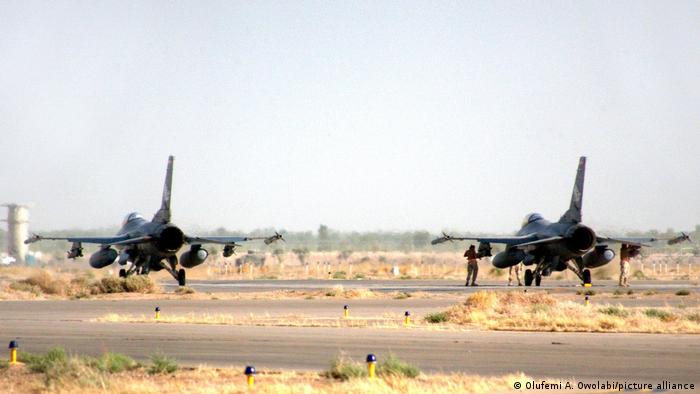 F-16 fighters are stationed at the Balad airbase, and several maintenance companies are present there, employing Iraqi and foreign staff

Five rockets struck Balad air base, north of Baghdad, and two of them crashed into a dormitory and a canteen of US company Sallyport, a security source told AFP news agency.

Major General Diaa Mohsen, the commander of the Balad airbase, told Iraq's official news agency that one of the security forces injured in the attack was in serious condition. Mohsen said that the base didn't suffer any material damage.

So far, there has been no claim of responsibility for the attack.

Exposed to the danger of uncleared landmines

F-16 fighters are stationed at the Balad air base, and several maintenance companies are present there, employing Iraqi and foreign staff.

In recent months, the heavily fortified Green Zone in Baghdad, home to the US embassy and American troops in Iraq have been the target of repeated attacks blamed on pro-Iranian groups.

There have been around 20 bomb or rocket attacks against American interests, including bases hosting US soldiers, since US President Joe Biden took office in January.

Dozens of others took place from the autumn of 2019 under the administration of Donald Trump.

There have been calls from pro-Iran groups for the US to exit Iraq, like it is doing in Afghanistan, or face more attacks in order to be forced out. Coalition supply convoys in southern Iraq have faced attacks almost daily.

Last week, the US committed to withdrawing combat forces from Iraq, but didn't set a timeline.

A new law to aid Yazidi female survivors isn't enough. The Yazidi community says it's only a matter of time before they are attacked again.

On a historic trip, the pontiff urged Christians to stay in Iraq and prayed for "victims of war." Both Muslims and Christians told the pope of their lives under a violent "Islamic State" rule.