Rockers Geldof and Bono Urge Merkel to Help Africa | Germany | News and in-depth reporting from Berlin and beyond | DW | 03.01.2007

Live Aid legend Bob Geldof and Irish rocker Bono of U2 have called on German Chancellor Angela Merkel to help Africa's poor while her country holds the presidency of the Group of Eight nations in 2007. 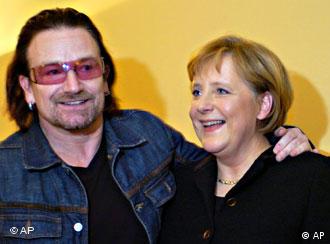 Bono and Chancellor Merkel got chummy at at the World Economic Forum in Davos, Switzerland last January

In a guest commentary in the German mass-circulation daily Bild, Irishman Bob Geldof said 2007 will be an important year for Germany.

"Let us hope and pray that Germany and its chancellor, Ms. Merkel, will at last get politicians to act," Geldof said in Bild's Tuesday edition.

Geldof, who was the mastermind behind the 1985 Live Aid concert and the 2005 Live 8 concerts to help Africa, said the continent's problems must be on the agenda when Germany hosts G8 leaders at a summit in the Baltic Sea resort of Heiligendamm in June. 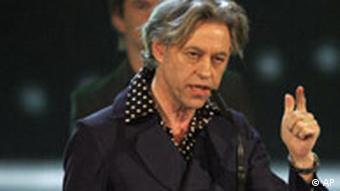 Geldof has long been an advocate for more help for Africa

Geldof said he was aware that many Germans are suffering from unemployment and have financial concerns, but said the country's economy would grow in 2007.

However, "for (Africans), there will again be no economic boom, no food, no medicine and no education," he said.

Irish rocker Bono has also been courting Germany to help Africa. He and German Chancellor Angela Merkel exchanged a much-publicized embrace at the Davos global economic summit a year ago.

Bono has urged wealthy nations in the past to grant debt relief to poorer nations.

According to the Financial Times (FT), Bono's London-based campaign group called "Data" plans to set up an office in Berlin next month along with Geldof.

Geldof's coordinator in Germany, Jeremy Gaines, told the newspaper that the two celebrity musicians want to work with German filmmakers and television broadcasters to draw attention to Africa's development needs.

Bono and Geldof lobbied then Chancellor Schröder (m) in Gleneagles

Geldof is also planning "Intellectual Aid" -- a series of debates with German thinkers about Africa, development and the role of Western countries, the FT reported.

The first "Intellectual Aid" debate is scheduled for March 22, which is World Water Day.

The second one is to be held in Berlin during the G8 summit in Heiligendamm to "monitor whether leaders are living up to their promises from Gleneagles," Gaines said.

Geldof's Live 8 concerts were held just days before the G8 summit in Gleneagles, Scotland in 2005 -- at which the group's leaders pledged debt relief for poor African countries. 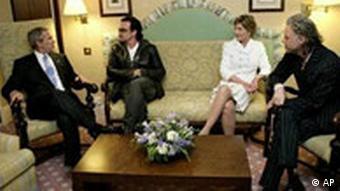 They also pledged $50 billion in extra development aid by 2010.

Germany has said it wants to set up a G8 program to encourage foreign investment as a reward to African nations who fight corruption and AIDS and who promote democracy.

According to press reports, Merkel's cabinet has drafted a proposal that each member of the G8 sign a partnership agreement with an African state.

Some German development non-governmental organizations, however, are skeptical of Bono and Geldof's work. They say the two celebrities pander to the media and that they do not consult or inform the NGO's enough about their plans.

Increased aid and debt relief for Africa top the G8 summit agenda. German Chancellor Schröder is optimistic the goals will be acheived. But, agricultural subsidies remain a major sticking point. (07.07.2005)

Africa Needs Help, But How?

The G8 summit kicks off Wednesday in the wake of rock concerts and calls for increased aid and debt relief for Africa. But experts in Germany remain divided over the best way to help the continent out of poverty. (06.07.2005)

More than 200,000 spectators attended Berlin's Live 8 concert. For six hours, 21 music acts played as part of the series of concerts to raise awareness about global poverty, especially in Africa. (02.07.2005)