More than 200,000 spectators attended Berlin's Live 8 concert. For six hours, 21 music acts played as part of the series of concerts to raise awareness about global poverty, especially in Africa. 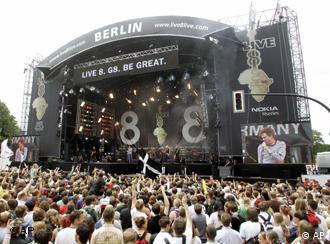 German favorites Die Toten Hosen kicked off the concert, electrifying the crowd while reminding the audience that helping Africa was the most important part of the event.

"This isn't a rock concert. It's a demonstration," Campino, the singer from the group, yelled to a jubilant crowd.

Germans and visitors from around the world packed into the wide boulevard that runs through the downtown park waving banners with the German band's logo as well as British and Argentinian flags. 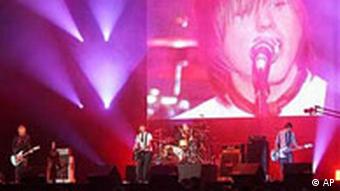 They and other performers, who each had just about 10 or 15 minutes of stage time, were part of a global concert series on Saturday which took in 10 cities and four continents. The free concerts began with Tokyo's show (photo) and with end in venues in North America. Besides Berlin and Tokyo, the concerts are taking place in London, Paris, Rome, Cornwall in England, Philadelphia, Barrie in Canada, Johannesburg and Moscow.

The shows were the brainchild of British musician amd former frontman of the Boomtown Rats, Bob Geldof, who wants to build a critical mass that will pressure leaders of the Group of Eight major industrialised nations meeting in Scotland next week to do more to alleviate poverty, particularly in Africa. Goals of the campaign include doubling the amount of aid which goes to Africa, relieving the debt of the world's poorest countries and putting fair trade policies into place to help developing economies.

Irish musician Bob Geldof, one of the original organizers of Live Aid concerts in 1985, poses for the photographers prior to a news conference in London.

This series comes 20 years after Geldof's first anti-poverty concert event, Live Aid. But unlike 1985, when an estimated 1.5 billion television viewers tuned in to watch Live Aid and donated over $100 million (83 million euros) for Ethiopia's famine victims, organisers hope to use modern technology like the Internet and mobile phones to reach an even bigger audience. 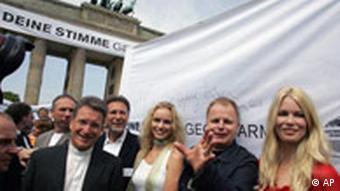 On Saturday before the show in Berlin, German celebrities such as Grönemeyer and supermodel Claudia Schiffer showed their support for the campaign to fight global poverty. At the Brandenburg Gate, they signed a banner carrying the slogan "Your Voice Against Poverty."

However, the show in Berlin came in for blistering criticism from event managers, who lambasted the German parliament and the city for not giving sufficient backing. In a newspaper interview, Marek Lieberberg, a veteran event manager who is putting on the show in Berlin, accused Berlin Mayor Klaus Wowereit, German authorities and businesses of "stinginess, ignorance and Wilhelminian absurd bureaucracy" 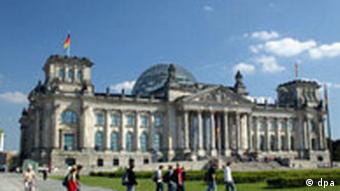 He complained that German companies did not come forward to sponsor the event as firms had in the other cities where concerts are being held.

He also criticized lawmakers for not allowing the concert to be held on the plaza next to the Reichstag, or parliament building.

But on Saturday, music lovers seemed little concerned about organizational glitches. Many in the audience carried red balloons or t-shirts that read "Make Poverty History." Families were strongly represented and children were often hoisted on fathers' shoulders so they could at least catch a glimpse of the stage. 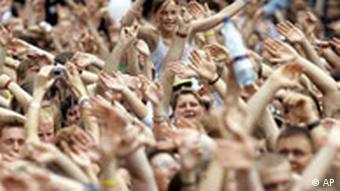 Fans cheer at the Live 8 concert in Berlin

Many of the 150,000 spectators had to watch the bands on giant video screens that had been set up since the location's space limitations meant that only some 40,000 had a direct view of the stage.

Germany has questioned a British proposal that the G8 nations double their development aid. Chancellor Schröder's Africa advisor said that a sudden increase in foreign aid to African countries would be counterproductive. (June 28, 2005)

Top finance officials of the Group of Eight industrialized nations kicked off a meeting in London Friday to try to clinch agreement on unprecedented debt relief for the world's poorest countries. (June 10, 2005)

The German parliament and the city of Berlin brushed back charges Friday from the organizers of the German Live8 charity concert for Africa that they have failed to give sufficient backing to the event. (June 24, 2005)