Irish rock stars Bono and Bob Geldof on Tuesday accused G8 nations of falling far behind on pledges of aid to Africa and put pressure on Germany as current head of the club to donate nearly one billion dollars. 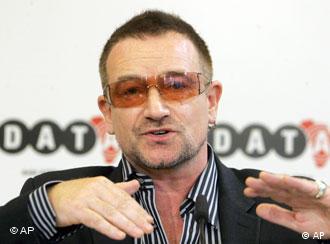 Bob Geldof said German Chancellor Angela Merkel needed to channel a minimum of 700 million euros ($947 million) in aid to Africa this year in order to meet a commitment signed by her predecessor Gerhard Schröder at the G8 summit in Gleneagles, Scotland in 2005.

"We are only asking what the politicians promised, not one euro more," the founder of Live Aid said at a press conference in Berlin on Tuesday.

"Schröder signed in the name of the German people, if Merkel betrays the pride of Germany, then she kills people 12 miles south of Europe in Africa," he said.

German music star Herbert Grönemeyer, who will sing at a major concert in Rostock on June 7 along with Bono and other musicians, said "politicians should just do their job and keep their promises." 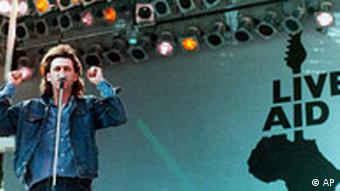 The calls come just weeks before Merkel hosts fellow leaders from the Group of Eight most industrialized nations at a summit in the Baltic Sea resort of Heiligendamm on June 6-8. Germany currently holds the EU presidency.

Bono said: "It is important that the G8 is taking place in Germany because people expect Germans to keep their promises."

"If you break your promise, then everybody else will abandon ship," he said.

Geldof and the U2 frontman unveiled a report by DATA -- a watchdog monitoring first-world help to Africa which the two founded in 2002 -- on the progress G8 nations have made in fulfilling their pledges made at Gleneagles to collectively increase aid to Africa by 25 billion dollars by 2010.

The DATA report found that only Britain and Japan were doing their share to meet that target.

Together the G8 nations stepped up development aid by $2.3 billion between 2004 and 2006, but this is less than half of what they needed to give to be on track to meeting their 2010 deadline.

"It is less than half of what should have been done," said Jamie Drummond of DATA.

"To get back on track in 2007, they would have to increase aid by $6.4 billion, but so far there is at best a third of this in the pipeline."

German authorities fear that up to 100,000 anti-globalization protestors could target the G8 summit, and Bono warned that failing to honor the group's promises to Africa could enrage activists. 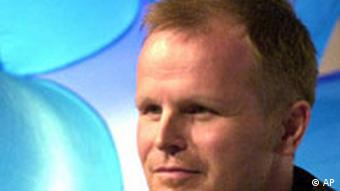 Germany's Grönemeyer has lent his voice to helping Africa

He said that although he was "opposed" to protestors resorting to violence, his own visits to poor countries had made him angry at the way the world neglected Africa.

"I want to say that I relate to their rage, I feel it myself when I walk into a hospital and see people queuing up to die."

Merkel has promised to use the summit to build on efforts to help Africa undertaken at Gleneagles in 2005.

On the weekend, Merkel devoted her weekly podcast entirely to Africa. She said she wants the leaders of the Group of Eight industrialized nations to keep their earlier promises for increased development funding.

She said the richest nations in the world can really make a difference. Failure to help Africa, she said, would come home to roost in the industrialized world.

"If we don't care about the fate of our neighbors in this globalized world, we will one day see the problems arriving at our doorsteps," she said.

"The migration of refugees can only be prevented if we help resolve the problems in their countries. And we must do it now," she stressed.

G8 stands for the world's leading eight industrial nations. But in the lead up to the 2007 G8 summit in Germany, some economists are again raising the question of whether the right members are in the G8 club. (14.05.2007)