Robbie Williams' new album is a blast from the past

It's here - Robbie Williams' new album! And the title, "The Heavy Entertainment Show," promises a whole lot of Robbie.

A record deal worth millions with a major label: that's the stuff for a furioso Robbie Williams comeback. And that comeback banks on the famous attributes of the British pop star as a singer, entertainer and party master.

The video sneak preview offers a taste of what's to come and builds on the opulent clips of the past: Robbie as ceremony master, surrounded by countless beautiful women. "Party Like a Russian" is like many of the 16 new songs on Williams' new album, "The Heavy Entertainment Show" - nothing truly new, but fans get to enjoy a whole lot of the old Robbie.

The British superstar really went to town again for the album. Brilliantly bombastic songs such as the title track alternate with pop-rock numbers that sound familiar ("Motherfucker" and "Sensational").

In-between are a couple of painless dance numbers like "Sensitive" and "Pretty Woman." And, of course, he had to do a hymn, like "Angels." He liked that one so well, he had to do three more: "Marry Me," "David's Song," and "When You Know."

"Best Intentions" sounds a bit like his super hit "Feel." "Bruce Lee," on the other hand, comes across somewhat scratchy-raspy, but is still reminiscent of the Electric Light Orchestra of the 1970s. In "Hotel Crazy," Robbie brushes on his jazz-swing phase, purring along through the Big-Band pop song replete with wind instruments. He left his band Take That in 1995. From left to right: Gary Barlow, Howard Donald, Mark Owen, Robbie Williams and Jason Orange

On the new album, the ex-Take That singer takes musical stock of his 20-year solo career.

Heavyweights Rufus Wainwright and Ed Sheeran helped him out, as well as his former producer and songwriter Guy Chambers - and that's maybe the reason why so many songs are so reminiscent of the old Robbie.

Chambers, namely, helped to catapult Williams' first five solo albums into mega hits. He contributed to super hits "Angels," "Feel," "Let Me Entertain You," and many more. Yet, growing apart musically, Chambers and Williams went their separate ways in 2002.

That wasn't necessarily a good move for Williams; his music suffered. Still, his albums continued to sell like hotcakes. It was as if his millions of fans would forgive him anything.

It wasn't until 10 years later that Chambers and Williams reunited, releasing "Swings Both Ways" and once again landing them way up in the charts together.

Guy Chambers was also the driving force behind the song "Party Like a Russian." He walked into the studio and said he had a song idea and that that should be the title. People had all sorts of associations with it. "It reminded me of Oktoberfest in Germany," Robbie said. "That's a hard-core party."

"It also made me think of the raves in England's clubs and pubs, where everyone thought we were the best at partying and drinking in the world," he said. "But that's nothing in comparison to a Russian party. Those people are truly hard-core."

Many Russians, however, don't think it's so funny to be depicted that way and have criticized the singer for relying on clichés and bringing him to the brink of being racist.

However, Robbie's personal favorite on the album is "Motherfucker," although he does like "Hotel Crazy," too. And "The Heavy Entertainment Show" isn't too bad either, he noted, when asked what his favorites were. 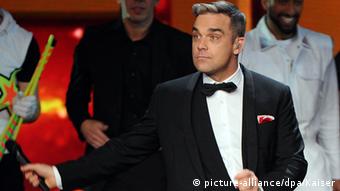 Forever an entertainer Robbie Williams, as long as his back hold out

Recently, there have been reports about Robbie's health. He himself told the British newspaper "Evening Standard" at the beginning of October that he had arthritis and couldn't even kick around a ball. And, just to make sure he didn't look like a "drunken father at a wedding" while dancing, he said was taking things a little slower on stage. "When I was younger, my stage performances sucked so much of my energy that I was at the end of my rope after the tours."

Nowadays, he's more relaxed about everything. "I dress up to the nines, try to be as charismatic as possible and give the best show I can without burning myself out." Fans can form their own opinion about Robbie's health when they see him perform on his big tour slated for 2017.

His kids have brought him down to earth

Robbie is married, has two kids, and seems as happy as ever. In his song "I Love My Life," he sings about his kids Teddy and Charlie. He never had as great a childhood as his kids have now, he said. He wanted to break through his own bad luck by giving his kids the best opportunities possible, and to give them a feeling of love and security. "My wife and I love each other, and we have a nice, safe home life. I truly hope that that helps our children to appreciate and love themselves."

And maybe Robbie means that about himself, too. He seems, at any rate, to have made peace with his past. No more drugs, no more self-doubt, also no more over-estimating himself. Robbie Williams is now fully in the here and now: "I am powerful. I am beautiful. I am free. I am wonderful. I am magical. I am me."

Robbie Williams embodies the constant ups and downs of the music industry like hardly any other artist. The one-time teen idol celebrates his 40th this year on February 13. (13.02.2014)

He kicked off his career in a boy band, but nearly drowned in drugs. Still, he's always managed to pick himself back up and reinvent himself. A super star around the world, here's Robbie's career in pictures. (04.11.2016)