Riots in Paris after alleged baton rape by policeman

Protesters came out in support of a victim of alleged police brutality, which included being raped with a baton. Some protesters turned violent, which led to several arrests. 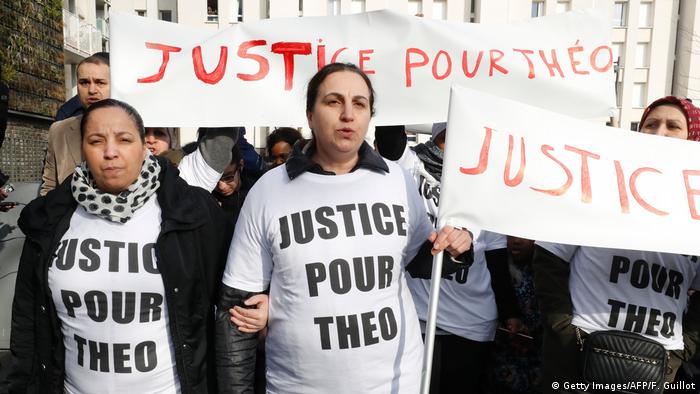 Protests have taken place across Paris and surrounding towns after police were accused of brutality, including sodomizing the young black victim with a baton, according to the victim's attorney.

One of the officers was charged Sunday with the rape, while four officers were suspended after they were accused of involvement in the incident last Thursday at a housing estate in Aulnay-sous-Bois, north of the capital. The victim's attorney stated police used tear gas and "one of them used an expandable baton" in an arrest "after hearing calls characteristic of lookouts at drug dealing sites."

The victim, only known by his first name, Theo, is being treated in hospital after suffering injuries to his anus, head and face. He was declared unfit to work for 60 days.

Stephane Troussel, the president of the General Council of the Seine-Saint-Denis region, where Aulnay-sous-Bois is located, said the incident brought up "numerous questions."

"Although thousands of police are doing their work properly…too many arrests end in nightmares for some young people. The image of the Republic is being tarnished," Troussel said in a statement.

French police are accused of using excessive force against suspects in poor neighborhoods, especially those of primarily African origin.

Protests and rioting have occurred for the past five days in and around Paris due to the case. Thousands took to the streets and caused damage in five towns in France.

Police arrested 17 Wednesday in the Seine-Saint-Denis region. In Aulnay-sous-Bois, a group of young people damaged all of the cars at a Citroen dealership, causing 200,000 euros ($214,050) in damage.

Authorities are concerned about a potential repeat of 2005 riots that spread throughout France and involved thousands of people in similar poor, immigrant neighborhoods. Riot police were sent to the protests, which started on Sunday, as a backup.

French police have arrested five people in connection with rioting in the northern city of Amiens earlier this week that injured 16 police officers. President Hollande has vowed a tough response. (16.08.2012)

About 100 youths clashed with police in the French city of Amiens overnight. Sixteen police were reported to have been wounded as the youths set cars, a sports center and a primary school ablaze. (14.08.2012)