Brazilian authorities have detained one of Rio de Janeiro's most notorious drug traffickers. Some 3,000 officers and troops were involved in the operation to arrest the man known to most by his nickname, "Rogerio 157." 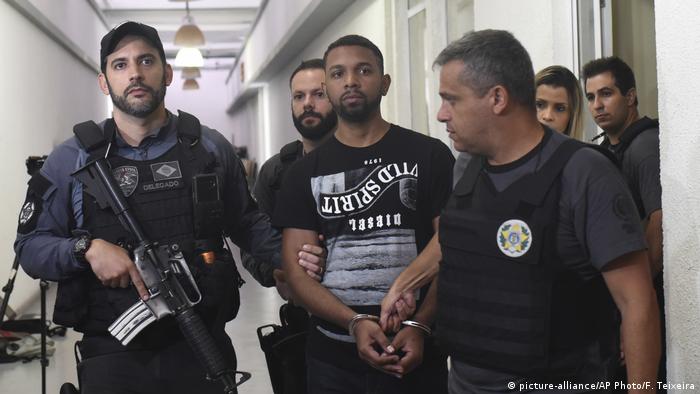 Handcuffed and sporting a black T-shirt with the words "wild spirit" written on it, Rogerio 157 was paraded before journalists shortly after his arrest on Wednesday.

"The trafficker Rogerio Avelino da Silva, or Rogerio 157, was detained in the community of Arara, in (Rio's) Northern Zone, in a joint operation of security forces... with support from the armed forces," Rio de Janeiro's state security secretary tweeted.

The capture of the crime boss represents a rare victory for the Rio authorities, as they struggle to contain rising violence in the city, which just one year ago hosted the Olympic Games.

According to Brazilian media, Rogerio 157 ruled over impoverished neighborhoods like a war lord, rather than merely a drug trafficker. Police photos published in a local newspaper purported to show his luxury villa, surrounded by poor ramshackle favela houses.

The crime boss had been particularly high on Brazilian authorities' most-wanted list since September, when his gunmen engaged in a series of street fights for control of Rocinha against loyalists of a jailed trafficking rival nicknamed "Nem."

According to Brazilian media, the gang warfare was prompted by Rogerio 157's decision to extend his authority over Rocinha, collecting taxes and taking control of cooking-gas distribution, as well as other important economic activities. That reportedly angered Nem, who is believed to still exercise considerable influence from behind bars, and ordered his gunmen to oust Rogerio 157.

The days-long violence in Rocinha resulted in the authorities deploying more than 1,000 officers and soldiers, as well as armored cars and helicopters, to the favela to stop the gang warfare.

Fighting over Favelas - The Redevelopment Push in Rio

Fighting over Favelas - The Redevelopment Push in Rio