The state of Espirito Santo has seen dozens of murders and hundreds of robberies in just a few days. The state government announced that more soldiers were being sent to quell the violence. 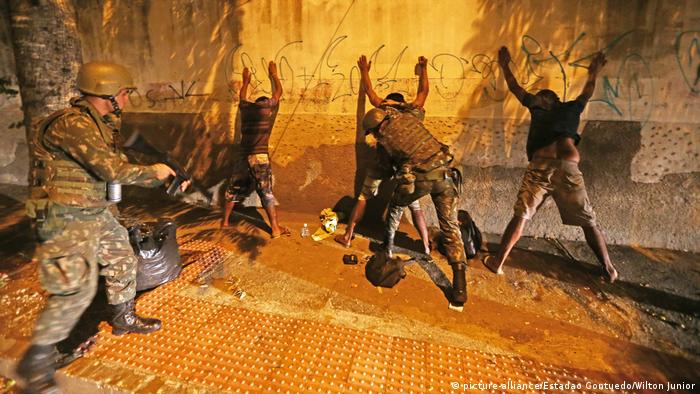 The governor of the Brazilian state of Espirito Santo announced on Wednesday that more soldiers were arriving to quell the chaos and violence that has seized the region as a police strike entered its fifth day. Acting Governor Cesar Colnago said the 1,200 already sent by Brasilia were "not sufficient" as the state saw some 80 murders in just four days.

Local media broadcast video of muggings, carjackings, looting and other violence as the cities, including state capital Vitoria, remained bereft of law enforcement. Espirito Santo has seen about 200 robberies and about 90 million reais ($29 million, 27 million euros) in damages to local businesses, the local police union said as the federal government remained mum on crime figures.

"We are taking steps to increase the level of the National Force, which is police, and of the armed forces so that we can have security," Governor Colnago told the press. He said the condition on the streets had deteriorated so badly that many were afraid to leave their homes.

The Military Police, as the forces patrolling Brazil's city streets are known, are demanding better working conditions and higher pay as the country's budget crisis has begun to affect all sectors of society. Although they are barred by law from going on strike, relatives and sympathizers have blocked police stations and the officers are not trying to get out.

A court declared the strike illegal and the state police chief was removed from office, but it has had little effect.

Scores of inmates at large after Brazil prison break

Brazilian police are still searching for dozens of inmates after the country's latest prison break. More than 150 inmates have been killed in prison riots since the beginning of the year, many of them beheaded by rivals. (25.01.2017)

Security forces have managed to separate rival drug gangs at Alacuz prison near Natal. The facility has seen a week of violent rioting that has killed dozens. (22.01.2017)

SWAT teams have quelled a riot at a prison where an uprising left 26 inmates dead over the weekend. Brazil has been hit by a series of prison revolts that have left some 140 inmates dead since the start of the year. (17.01.2017)