The right-wing People's Party (SVP) emerged as the victor in the Swiss elections, taking 29 percent of the vote. It was the best-ever election result gained by a party since 1919 and consolidated its majority. 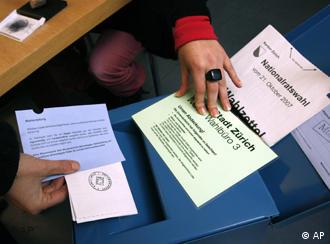 The right and the Greens were the biggest winners

The populist SVP's strengthened its position in parliament after it ran a controversial campaign calling for the expulsion of foreigners who commit serious crimes and for throwing out entire immigrant families.

"Those who are against the EU, who want lower taxes, who want security and fewer criminal foreigners voted for the SVP," he said.

The party was accused of racism and xenophobia for a campaign poster that showed white sheep kicking a black sheep off the Swiss flag with the slogan, "For more security." It even earned the party condemnation from the United Nations. 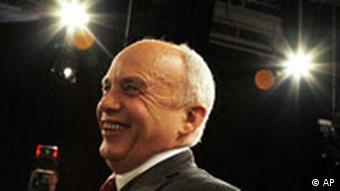 SVP president, Ueli Maurer, was all smiles after hearing the results

The Swiss Socialists suffered a major setback in the elections, losing 3.8 percent of their support and taking 19.5 percent of the vote.

Socialist parliamentarian Liliane Maury Pasquier said the SVP had played on people's fears of globalization and feeling of economic and social insecurity.

"The SVP dresses all this up in xenophobic and anti-European colors," she told the AFP news agency. "People think they are defending themselves by voting SVP."

The center-right Radicals saw their share of the vote drop slightly and the Christian Democrats saw a slight gain, taking them to 15.6 percent and 14.6 percent respectively. 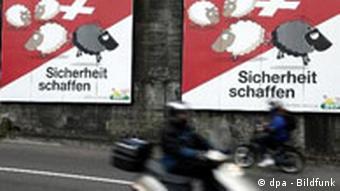 The Greens, the fifth biggest party, garnered 9.6 percent of the vote, up 2.2 percentage points from four years ago. The Socialists' losses were partly due to advances made by the Greens.

In parliament in Berne, the People's Party now have 62 of the 200 seats. That is an increase of seven on their previous majority. The Socialists (SP) have 43 mandates. The Radicals and the Christian Democrats both gained 31 seats.

The Greens gained six seats and will now be represented by 20 deputies. This is their best performance in their history and reflects growing fears about climate change.

The country must now await the election of the cabinet in early December to see whether the new division of seats will alter the balance of power there. The four main parties have shared the cabinet posts in an informal consensus knows as the "Concordat" for 50 years. It remains unclear whether the Greens will now be included in the government.

Polls closed in Switzerland on Sunday, Oct. 21, ending what may become known as the most acrimonious campaigning in Swiss history. Accusations of racism in the far-right Swiss People Party were the focus of the campaign. (21.10.2007)

Switzerland's the only country that requires its soldiers to keep guns at home. But concerns over high suicide rates and killings within families have caused some to ask whether having them there is simply too dangerous. (29.07.2007)

What do you think about the outcome of the Swiss elections? Send us an e-mail. Please include your name and country in your reply.