Right-wing extremists tricked by ′Trojan′ T-shirts | Germany | News and in-depth reporting from Berlin and beyond | DW | 09.08.2011

Hundreds of free T-shirts handed out at a weekend right-wing rock festival in the eastern German state of Thuringia contained a secret surprise. Upon washing, the original graphic faded to reveal a clandestine message. 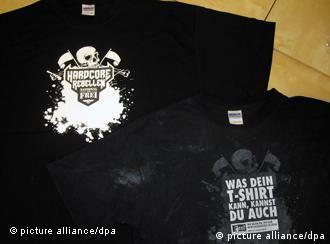 About 250 T-shirts were distributed at the rock concert

German skinheads who took home free T-shirts after a music festival on Saturday were in for a big surprise.

The shirts, which bore a skull and crossbones symbol and the word 'Hardcore Rebels,' faded upon washing to reveal a hidden message: "What happened to your shirt can happen to you. We can help you break with right-wing extremism."

The T-shirts were the work of Exit Deutschland, a group that helps young people transition out of militant right-wing lifestyles.

"With these T-shirts we wanted to make ourselves known among right-wingers, especially amongst young ones who are not yet fully committed to the extreme right," said Exit founder Bernd Wagner.

About 250 of the shirts were distributed at the ninth edition of the Rock für Deutschland concert, in the town of Gera, in eastern Germany.

Around 600 neo-Nazis were in attendance at the concert, which is run by the extreme right-wing National Democratic Party.

With members as young as 17, the "Standarte Württemberg" extremist group wants to drive all foreigners out of Germany. But investigators cracked down on Wednesday with a series of raids. (28.07.2011)

Friday's massacre in Norway has placed a renewed focus on the far-right after the killer claimed to have links with extreme right-wing parties in Europe. The parties have quickly responded by condemning the attacks. (25.07.2011)