With members as young as 17, the "Standarte Württemberg" extremist group wants to drive all foreigners out of Germany. But investigators cracked down on Wednesday with a series of raids. 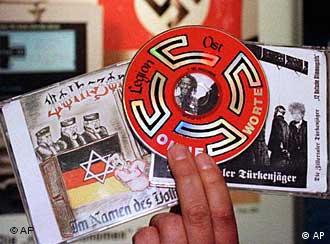 Police in southern Germany raided 21 homes and properties on Wednesday, seizing weapons in an investigation against right-wing extremists.

Around 140 police officers took part in the search in the southwestern state of Baden-Württemberg, confiscating ammunition, a gun, computers, knives and neo-Nazi propaganda from 18 members of a group known as "Standarte Württemberg."

The suspects, aged 17 to 49 years, were all known to investigators for previous far-right links, state prosecutors said in Stuttgart.

The prosecutor's office said the group's goal was to expel all foreigners out of Germany by all available means.

There was no evidence of concrete plans for an attack, nor was the investigation linked to recent extremist attacks in Norway, prosecutors said.

Investigators were looking into raising charges of weapons-code violations against the suspects.

Friday's massacre in Norway has placed a renewed focus on the far-right after the killer claimed to have links with extreme right-wing parties in Europe. The parties have quickly responded by condemning the attacks. (25.07.2011)

The protection of young people is a top priority in Germany. But as neo-Nazis increasingly use the Internet to appeal to young people, youth protection agencies are demanding action. (22.07.2011)