Riesling was once among the most expensive wines. Later, wineries focused on quantity, and quality suffered. But in recent years, the pendulum has been swinging back - a boon to Germany's Rheingau Region. 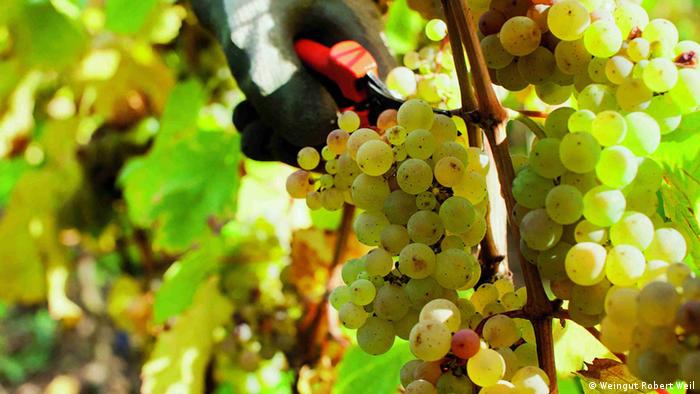 Fourth-generation vintner Wilhelm Weil ushers a visitor into his grandfather's house. The winery he runs is one of the great Riesling producers in the Rheingau region of Hesse in south-western Germany. Outside, the autumn sun shines on the vineyards. Indoors, vintage ceiling lamps illuminate old wooden floors, and framed menus hang on the walls.

Wines produced by his ancestor Robert Weil were served at the dinner table of the then King of Prussia. The Russian tsar and the Viennese imperial family also appreciated the Weil family's white wine. The royals paid 16 Goldmarks per bottle for the winery's Kiedricher Auslese of 1893 - a price well out of reach of most ordinary mortals at the time.

But that was a long time ago. The Robert Weil winery has since evolved into a highly modern winery that devotes itself exclusively to producing Riesling wines.

"Germany is the hub of the Riesling world; 60 percent of Riesling acreage lies in Germany," Wilhelm Weil says.

From the Rhine to the Taunus

In Weil's home region of Rheingau, Riesling covers nearly 80 percent of the available acreage. The region touts itself with the slogan "Rheingau is Riesling and Riesling is Rheingau." 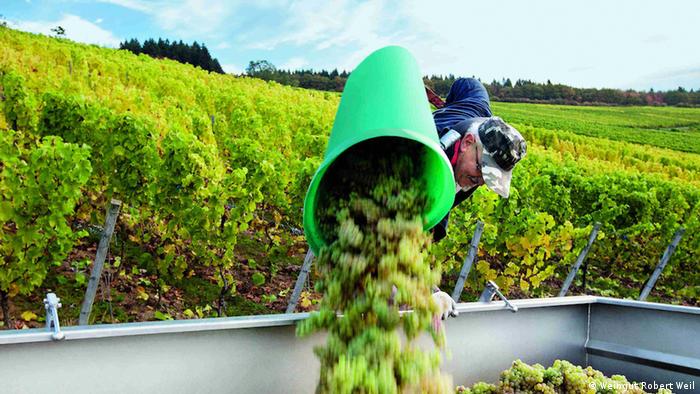 The 2014 wine harvest is going well

Although the Rheingau, with almost 2,500 properties under cultivation, is one of the smaller wine regions of Germany, its hillside vineyards are geologically very diverse - ranging from lower-elevation soils directly on the banks of the Rhine up to higher-altitude terroirs in the foothills of the Taunus Mountains.

The stony, dry soils and the rather cool local microclimates favor the Riesling grape.

In autumn there are harvest meetings every day at Wilhelm Weil's winery. How long should they allow the grapes to stay on the vine so that they develop their full quality? Finding the best answer to this question is part of the winemaker's art. The Riesling vine has smaller fruits and a later maturity. Sudden episodes of bad weather can harm the grape's quality, or even lead to rot.

"Every year brings a life cycle in miniature, with birth, youth, maturity, old age and harvest, or death. There are, of course, ways to produce uniform wines in consistently high quality. Nevertheless, each wine and each year is unique, with their own development and character. The vintner only has one chance to interpret them and to make something delicious out of them, " says Eva Fricke, a young winemaker in the Rheingau.

Fricke came from Northern Germany in 2006, moved into an old, disused winery in Kiedrich, and started with less than a quarter acre of leased vines, enough to make just 600 liters of wine. Today she manages 6 hectares and produces about 30,000 bottles a year. Most of it is exported.

"When it comes to wine, Riesling is for me the epitome of finesse, elegance and individuality, modern and traditional at the same time," she says.

Wines from the monastery

Not far from Fricke's small winery is Kloster Eberbach, by far the largest winery in Germany. 250 hectares are under cultivation, of which 80 percent are devoted to white wines - mainly Riesling. 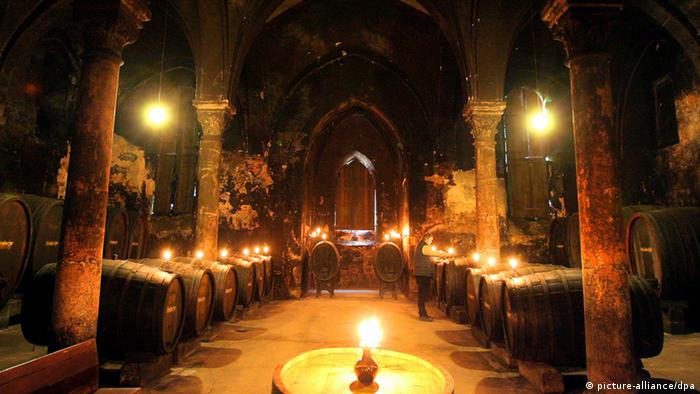 The Eberbach monastery is home to Germany's largest winery

As long as 600 years ago, Cistercian monks cultivated wine grapes here. Since 1805, the winery has been owned by the German state. CEO Dieter Greiner gives a tour of the "Hospitalkeller," where wine is aged in old barrels. It's cold and damp down here, and the dark, moldy ceiling is covered with wine cellar fungus.

Greiner has modernized the winery's operations, and also opened up new export markets.

"There is no German city in which as much Riesling is served in restaurants as in the Norwegian capital Oslo," he says proudly. Scandinavia is one of his most important markets. "You can get Steinberger Riesling from Kloster Eberbach as soon as you arrive in Norway, at Oslo airport," he says, laughing.

For the Robert Weil winery, the UK is the next most important market after Germany, but its wines are also sold in the USA and Asia. The Rieslings are considered high-priced, but are still considerably cheaper than many Bordeaux red wines. A bottle of Riesling from the Weil estate costs $22 at retail in New York.

Wilhelm Weil points to the special quality of the company's white wine. The amount is deliberately limited. Quality takes priority over quantity.

He's optimistic about the wine from the 2014 harvest. "Quantitatively, it was just average, but in quality it was very good. It's going to be a flavorful vintage with many facets."

Wilhelm Weil is also president of the Rheingau branch of the VDP, an association representing Germany's high-quality wineries. His goal is clear and simple: "I want to help restore Rheingau Riesling to the renown it once enjoyed."

Connoisseurs are rediscovering wines from the Elbeland area in Saxony, once part of East Germany. DW's Katherine Sacks shares the highlights for a perfect wine weekend in the country's smallest wine region. (02.10.2014)

The dreaded grapevine moth is one the worst enemies of wine growers in Germany's Ahr valley. Using pheromones to trick and confuse male moths and disrupt mating is proving to be a success. But it isn’t without problems. (07.10.2014)