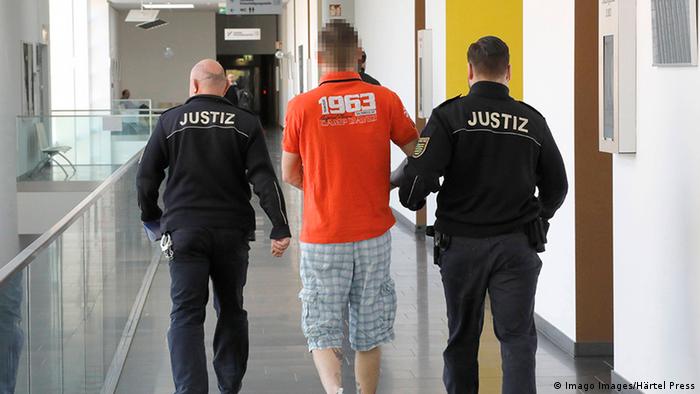 Eight members of the neo-Nazi group "Revolution Chemnitz" were sentenced to several years in prison by a court in eastern Germany on Tuesday.

In their ruling, the Higher Regional Court in Dresden agreed with prosecutors that the group constituted a terrorist organization.

The ringleader, Christian K., was handed the longest sentence —five years and six months — for founding and being a member of a terrorist group.

The other defendants were sentenced to two years and three months in prison for taking part in "Revolution Chemnitz." Five of them were also found guilty of severely disturbing the peace, while another was also sentenced for aggravated assault.

The men, aged 22 to 32, allegedly lead the skinhead, hooligan and neo-Nazi scenes in the eastern German city of Chemnitz.

What is 'Revolution Chemnitz'?

The group formed in Chemnitz September 2018, in the aftermath of anti-immigrant protests that engulfed the eastern German city.

According to prosecutors, Christian K. invited the other seven members to an online chat where he then posted a document outlining what he wanted the group to achieve.

None of the members objected to the plans, which essentially outlined a call for violent action against "leftists, parasites, Merkel zombies, media dictators and their slaves."

The group allegedly planned  to orchestrate a civil-war-like rebellion in Berlin on October 2, 2018. Prosecutors based their charges partly on the use of chat logs found on the defendants' mobile phones.

The members of the group were caught by police during a so-called "practice-run" in mid-September when they attacked refugees and a group of young people — one of whom was beaten.

The trial went ahead on Tuesday despite the ongoing COVID-19 pandemic, since any interruption of proceedings lasting longer than 10 days would have forced the trial to start over from the beginning.