Reviving the lost art of 'Dastangoi' storytelling in India

During the time of the Mughal empire, Indian and Persian storytellers narrated traditional tales of adventure and mysticism. Now, a group in New Delhi is reviving the art and retelling Islamic and Hindu myths. 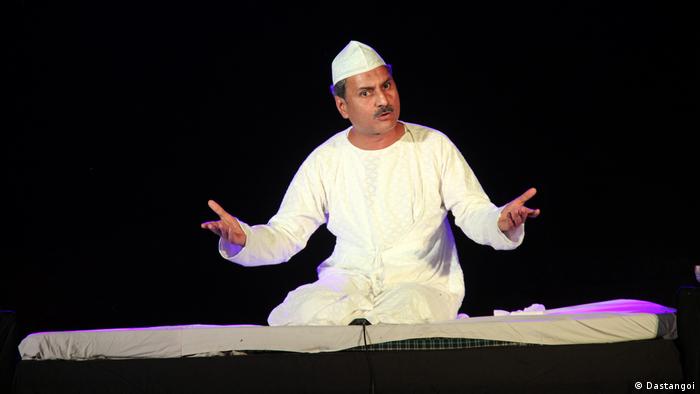 In a tradition that lasted hundreds of years, traveling storytellers in the Mughal Empire would narrate the tales of Amir Hamza, the uncle of Prophet Mohammed, and his childhood friend Amar Ayyar, a trickster.

The storytelling tradition, "Dastangoi," comes from "Dastan" in Persian, meaning 'story,' and "goi," meaning 'to tell.'

Traditional bards, called "Dastango" in Persian, acted out these tales in parts of the Arab world, Persia and India.

The storytellers would hardly use props, and relied on their linguistic and acting skills to captivate the crowds that would gather around them. But during the 19th century, the art began to die off.

Now, Mahmood Farooqui, artist and creator of the Dastangoi collective in New Delhi, is reviving the art and recreating the magic evoked by these traditional street performers. 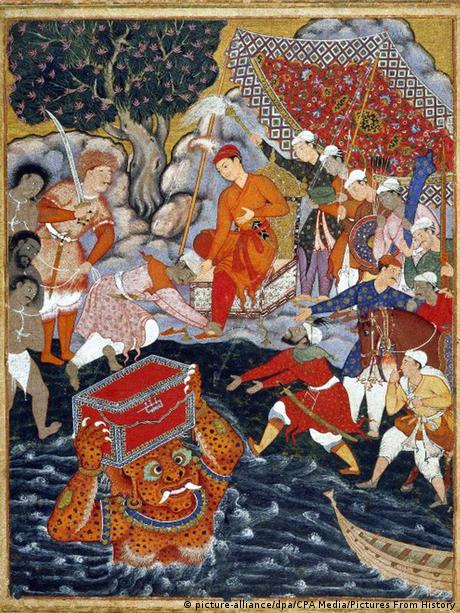 A section of the 'Hamzanama' panel, commissioned by Mughal Emperor Akbar in the 16th century

Tales of love and war

Dastangoi was a peculiar art form because the stories it told were originally intended to praise the glorious tradition of Islam and the adventures undertaken by Islamic heroes. But the Dastan focused instead on Amir Hamza, Mohammed's uncle.

Amir Hamza's stories were about war and love, in which the protagonist as a young lad travels to faraway lands, meeting fairies and genies and demonstrating his physical power and courage.

"While these tales deal with real, sacred figures like prophets and angels, the stories they tell are quite profane," Farooqui said. There is a lord of deception, a lord of wine and a lord of seduction, for example.

For Farooqui, these are a part of Islamic literature, but they violate mainstream conceptions about Islam as a religion today. He said the fact that these tales had such wide acceptance and popularity is proof that the Islamic world is much more open, tolerant and cosmopolitan than we tend to think of it.

The Dastan in India

The Dastan as an artistic genre arrived in India around the 16th century. It is thought to have come first to the Deccan region in southwestern India, and with the Mughal emperor Humayun when he returned from Iran.

Slowly, the Dastangoi began absorbing Indian culture and tradition, and artists began using Urdu in their performances. The art form reached its peak in the late 16th and early 17th century under Humayun's son, Emperor Akbar, known for his ambitious project of combining Hinduism and Islam into one world religion and for his encouragement of the arts and literature. 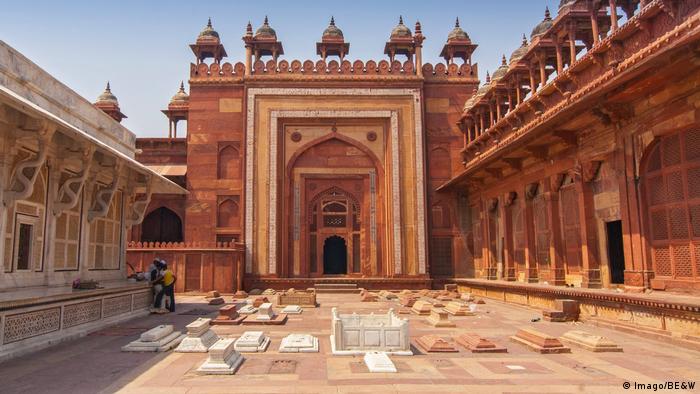 Emperor Akbar moved the capital of the Mughal Empire from Delhi to Fatehpur Sikri, now a world heritage site

The emperor also commissioned the first artistic project based on Amir Hamza's tales of adventure, called the "Hamzanama"[the epic of Hamza], which consisted of 1,200 painted panels. Historians suggest that medieval storytellers may have used these as props for their performances.

"By the 19th century, this thing [Dastangoi] had become so fecund and encyclopedic that Dastanswere about everything under the sun, cast in a magic realism-kind of garb, but still narrating the stories of Amir Hamza and his progeny," Farooqui said.

Around the same time, the Naval Kishore Press of Lucknow, a leading north Indian publisher of vernacular literature at the time, saw the potential of these stories and decided to print them in 46 volumes. The publishing house also released a Hindi adaptation of these stories, called "Chandrakanta."

The demise of Dastan

However, colonialism, together with its radically different standards of western poetry and literature, guaranteed the death of Dastangoi as a popular art.

"What they [colonialists] taught us was that our poetry was substandard, our poetry was wallowing in sentimentality and there was nothing natural about it," Farooqui said.

A Dastan was read from the perspective of a modern, western novel and was criticized for not being nuanced enough, with characters not showing enough psychological depth, for example.

Furthermore, the advent of new technology like the gramophone, the radio and the cinema spelled doom for Dastangoi.

Unlike in the west, where the opera continued to be regarded as high culture, the Dastan ceased to be seen as an important part of the subcontinental cultural heritage and was consequently wiped out, Farooqui explained.

In the 1980s, Farooqui's mentor, the author and intellectual Shamsur Rehman Faruqi, became interested in the tradition of Dastan and collected books on the topic from all over the world. For Farooqui, these books perfectly symbolized his interest in art, theater and history.

But reviving the ancient art form proved to be more difficult than expected. There was little information about how these stories were to be enacted because the tradition was passed on orally from generation to generation.

According to Farooqui, in countries like Morocco, Indonesia and Bosnia, these stories were musically rendered. But Indian Dastangoi, on the other hand, "didn’t use any music or props. There was just one seated performer, who sometimes went on for hours, and sometimes for weeks and months."

"We had no clue how to go about it because nobody had written about it. The practitioners themselves took it for granted and later generations did not take it seriously." Farooqui said.

Together with his stage designer and film director wife, Anusha Rizvi, Farooqui set up a framework to enact the old Dastan. Now, the tales are performed by two storytellers instead of one, adding to the drama. The actors wear old-style long shirts known as "Angarakha" and a "topi"or a head cap. They sit on an elevated platform behind a low wooden table, called the "takht." 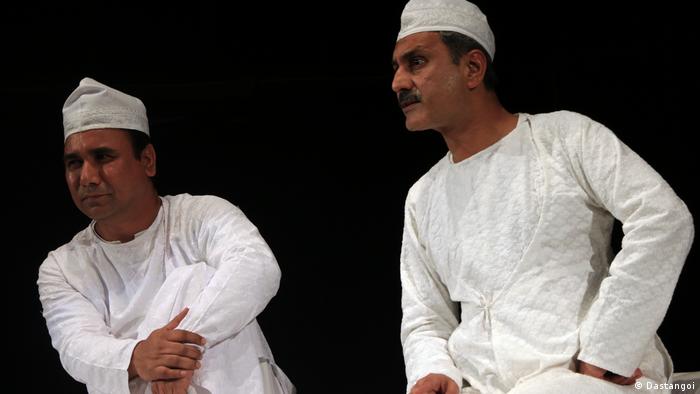 Despite the fact that the stories are told in old and complicated Urdu, the shows have been a success, but that is probably because the Dastangoi collective consistently addresses current political, social and cultural themes.

A few years ago, Farooqui performed the "Dastan-e-Jai Ram ji  ki"[The story of 'victory to Lord Ram'], which was based on a book by author A. Ramanujan that discusses 300 versions of the Hindu epic, Mahabharata. It was banned under pressure from religious groups.

The collective's most recent performance is called "Dastan-e-Karn," based on the character of Karna from the Hindu epic, Mahabharata. An outsider, Karna is the illegitimate child of Kunti, a princess, and the sun god, Surya. Kunti herself has five children, called the "Pandavas," who fight the battle for justice against their cousins, the "Kauravas."

For Farooqui, who likes to shift between Islamic and Hindu myths and legends, these stories have radical plots that allow for a great degree of artistic and political expression and freedom.

The figure of Karna also represents marginalized sections in society, like Dalits, or lower Hindu castes and untouchables, who still struggle to make their voices heard.

Luckily, Farooqui has yet to face any backlash for his performances, although that might have to do with his intense engagement with Hindu scriptures despite being a Muslim. Ironically, he said, he may even be considered a "model Muslim" by Hindu fundamentalist groups, because he reads and adapts Hindu sacred texts for his storytelling performances.

Why Pakistani feminists are reluctant to talk about marital rape 12.04.2022

In many South Asian countries, it is not illegal for a husband to rape his wife. Pakistan's feminist movement faces challenges in exposing sexual assaults that have been shrouded in secrecy.