Germany may not be known as a powerhouse for design and fashion, but the country and its people still have their own style. A new book traces the changing face of what it has meant to be "very German" over the years.

If you were asked to define German style, what would you say?

That was the question that authors Silke Wichert and Nina Zywietz found themselves having to answer frequently both while at home in Germany abroad. During their research for the book "The Germans: A Nation's Style and Icons,"  the two influential stylists uncovered a range of answers.

Jokes about Lederhosen and Dirndl aside, Germany's citizens have a very unique style and sensibility when it comes to fashion and their approach to life.

"Of course Germany, as in every nation, has its own unique way of going about things," write the authors in the foreword. It's simply that, lost in the jokes, people don't necessarily recognize it for what it is. Even Germans themselves.

"We had to discover for ourselves that even we are more frequently typically German than we'd like to admit. And that not only because one of us is still bringing whole wheat bread with spread to parties in Spain, confusing even our own children," they write.

So what is "typically German"?

The anthology collects photographs and personal anecdotes from contributors like fashion designer Ayzit Bostan and design journalist Christoph Amend in response to that question. Filled with photographs, the book is divided into 10 short chapters that explore subjects ranging from the Germans' approach to sports, their clothing and fashion sensibilities, home interiors and the art of travel. Bauhaus gets its due, as do a range of German-born models and celebrities.

The authors ask celebrities like Til Schweiger to define Germanness and come away with interesting, if not clichéd responses. Schweiger notes punctuality and precision as two character traits often associated with Germans. But, he says, the country really could do away with the need for making dinner dates two months in advance. "People in other countries would have long since forgotten."

German fashion in the eyes of the beholder

While it may be easy to pinpoint Parisian chic, it seems harder to pin down what it means to be "so German" in terms of style and fashion. Each of the contributors and interviewees has a different idea. A scarf? Cropped haircuts? "Guardian" correspondent Kate Connolly notes men at high-level conferences show a fondness for fake tans.

Asked to define German fashion sensibilities, Melissa Drier from the US fashion bible "Women's Wear Daily" replied with the famous German idiom: "Ist mir wurscht," or in English, "It doesn't matter what I wear." It's a biting statement on the average German's lack of interest in what they're wearing, especially considering the numerous top designers born and raised in Germany, including Karl Lagerfeld and Jil Sander. 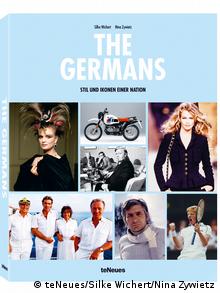 So it may not be all Lederhosen and Dirndl in the country. Still, the German influence on the fashion industry might best be pinpointed when looking not at what the nation is wearing but rather at the nation's contributions behind the scene. Claudia Schiffer and Heidi Klum are cited, as are photographers Juergen Teller and Peter Lindbergh - both of whom continue to play a major role in fashion's trendsetting sphere.

Inside the German psyche

But it's not all about appearances and aesthetics. The book explores in-depth the way music helped shape the nation - from the Berlin nightclub Tresor, which helped launch electronic music following the dark industrial days of the 1980s, to the rock group The Scorpions, which bridged the Atlantic gap in rock 'n' roll. While some of the photographs feel dated, they capture a moment in time that was highly influential to most Germans today. The Scorpions' "Wind of Change" song memorably captured the mood in Europe in 1989.

Writers Silke Wichert and Nina Zywietz also look at the fashion choices of politicians to give readers an impression of the ways things have changed over the last century. From Joschka Fischer's white Nike tennis shoes at his swearing-in ceremony to a debate over French President Sarkozy's Dior suit, the authors explore what has gotten German tongues wagging in order to create a picture of what drives the country style-wise.

Although some of the images might cause readers to wrinkle their nose - what do German shepherds have to do with style? - the writers have created a book that better explains "The Germans" than most citizens themselves could do. It might even leave German readers wondering just how typically German they themselves are.

What do houses from the 3D printer in Dubai, a museum in Hangzhou, a suspension railway in Medellín, urban farming in Detroit and a micro home in Berlin have to do with the German Bauhaus? (03.05.2017)

Throughout his six-decade career, designer Karl Lagerfeld has always had a muse of the moment. From Vanessa Paradis to Claudia Schiffer and Keira Knightley - we look at five of his favorites.  (21.11.2016)

With his abstract forms and bold colors, Wassily Kandinsky was a revolutionary. Hated by the Nazis, he not only painted, but taught other artists to think outside the box. He was born 150 years ago on December 4. (02.12.2016)