Restorers work to save Venice treasures from the tides

Millions of visitors come to Venice every year to marvel at its ancient buildings and artworks. But centuries after its first pilings were sunk into the lagoon, la Serenissima, as the city is fondly known, is crumbling. 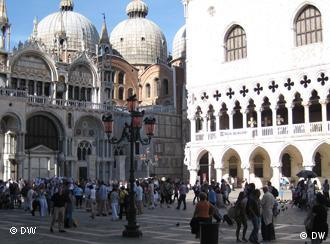 The cathedral has watched over Venice for a millennium

Conservationists say the sheer volume of tourist traffic and the increased development it entails, together with the rising water levels, are endangering Venice like never before.

Still, the residents are refusing to give in without a fight. In addition to large-scale engineering projects, restorers are working tirelessly to preserve the treasures of the city and return them to their original splendor.

At St. Mark's Basilica, restoration work has already been going on for decades. The city's main cathedral was built about a thousand years ago, on the site of an older church constructed in the ninth century. When Venice was a major crossroad between East and West, its rulers held their coronations inside.

The symbol of a once powerful city-state, the monument is now decaying.

Race against the elements 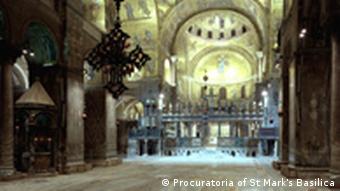 The Basilica's priceless mosaics are decorated in gold and precious stones

"The main enemy of the Basilica is water," said Ettore Vio, the architect in charge of all restoration work at St Mark's. "The high tides enter the atrium 200 times a year -even if only a little bit. So all of the masonry or stonework is soaked with water."

This has a devastating effect on one of the main features of the Basilica - its mosaics. Eight thousand square meters (86,000 square feet) of priceless mosaics, decorated in gold and other precious stones, cover the ceilings, walls and facade of St Mark's. Dating from the 11th to 13th centuries, they depict scenes from the Old and New Testaments and events from the lives of several Christian saints.

"The water soaking the masonry is salt water," Vio explained. "The salt grows in volume when it crystallizes. When it expands inside the brick, it cracks the brick. So, little pieces of brick keep falling down. If there's a mosaic over the brick, the mosaic falls too."

Vio employs 20 restorers, including six mosaics experts, to tackle the ravages that salt water and time have wreaked on the Basilica.

In a workshop behind the Basilica, restorers pore over hundreds of tiny cube-shaped stones, or tesserae, which make up the mosaics. Each is carefully arranged on a piece of fabric in a pattern that duplicates its placement in the Basilica.

Some of the tesserae are nearly 1,000 years old and every effort is made to preserve them. Only a few are replaced outright.

"The work has to be done in the least intrusive way possible," Vio explained. "They can't change them. They must respect the antiquity of the pieces, even the smallest of them." 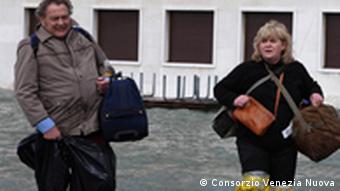 One of the restorers, Guido, says that each square meter of mosaic takes two craftsmen close to a year to return to its original state.

"We took seven years to restore the Baptistery - reinforcing and cleaning it," he said. "We've been working on this pavement here for more than 5 years, probably seven years. This is not work that you can hurry."

In Ettore Vio's 30 years at the Basilica, his staff has restored various cupolas and chapels. The 76-year old says their most difficult task was the crypt beneath the altar - where the remains of Saint Mark, the patron Saint of Venice, once lay.

"We injected resin into the walls to close all the holes through which the water passed, then we repaired the stone work and treated it, so that it could exist with the least salt possible,"” explained Vio. "The high tides came into the crypt. Now nothing comes into it any more. It was 10 years of work."

But it's a never-ending job: Time and tide wait for no man. 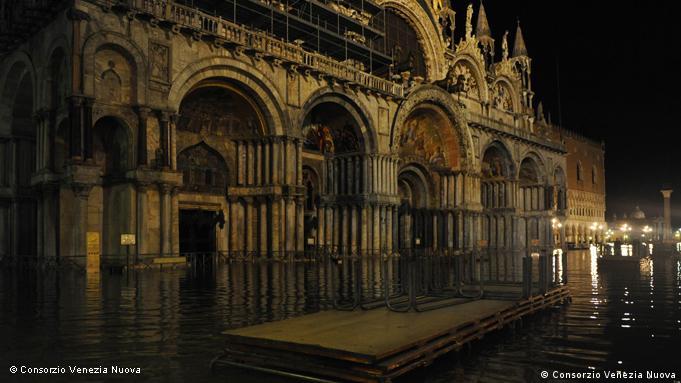 The Italian city is estimated to have lost 23 centimeters (9 inches) of land over the past 100 years. The high tides inundate the older and lower parts of Venice more frequently than ever before.

The Tide Monitoring and Forecast Center in Venice records the water levels, and forecasts and warns of exceptionally high tides. Director Paolo Canestrelli says 2010 brought the worst flooding in more than a century.

In the decades since Venice began officially recording the high tide in the early 20th century, tides of greater than 110 centimeters occurred on average just three to four times a year.

"These past two years were characterized by lower atmospheric pressure levels practically all around Europe," Canestrelli explained. "Low pressure produces an expansion of the seas and so a rise in average sea level."

Though this year has been better, Canestrelli says sea levels are still rising - and the city remains largely unprotected. Flood gates won't be ready until 2015 at the earliest, and many question whether the gates will actually hold back the rising tides.

Still the restorers work on faithfully - trusting that their skill will be enough to keep ahead of the tides.

Click on the link below for more pictures of St. Mark's Basilica and the restoration work.

Activists want to limit tourism and development to save Venice

Italy's main conservation organization says mass tourism, rampant construction and global warming are killing the city of canals; they've appealed to the United Nations to add the city of Venice to its endangered list. (05.07.2011)

This summer, thousands of tourists will head to Europe's most famous architectural mistake: the Leaning Tower of Pisa. After more than 800 years, the tower still leans - but now it's cleaner and more stable than ever. (28.06.2011)

The owners of a Renaissance palace in the Czech capital are keeping lavish sets created for a television miniseries set in 15th-century Rome. (03.03.2011)