There are reports of deaths after soldiers started shooting after a fire at the Kondengui Central Prison in Yaounde. Anglophone detainees have staged protests about their detention and prison conditions. 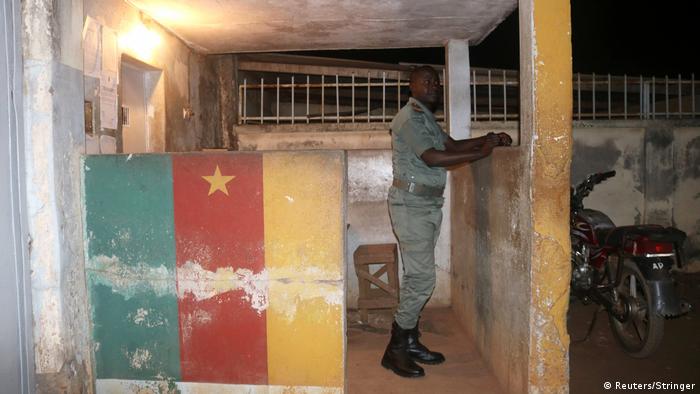 A fire broke out at the Kondengui Central Prison in Cameroon's capital city, Yaounde on Monday night after detainees, largely from two Anglophone regions of Cameroon, held a protest in the overcrowded detention facility.

DW intern Mimi Mefo Takambou reported that "Kondengui, one of Cameroon's biggest detention facilities, is in flames." Gunshots were heard from inside the prison a few minutes after the fire started.

Later a spokesperson for the Social Democratic Front (SDF) party said four inmates had died after they were shot by soldiers. Others had been injured as tear gas and live bullets were used.

Special anti-terror security forces were sent to the prison, Takambou reported. "Hundreds of soldiers have stormed the prison to prevent chaos," she said. "Anglophone inmates held there were on strike earlier today." They were protesting their illegal detention and calling on the international community to intervene.

The internet was shut down while a drone was flown over the prison.

The government is yet to make an official statement.

The defense minister and the head of the gendarmerie arrived at the prison late Monday night.

Built in 1967 for 1,500 inmates, the facility currently holds an estimated 9,500. In 2011, Amnesty International described conditions as "harsh, with inmates suffering overcrowding, poor sanitation and inadequate food. Prison guards are poorly trained, ill equipped and their numbers inadequate for a big prison population."

The prisoners, many of whom say they are being held for political reasons, took their plight to social media on Monday, posting on Facebook that they were being mistreated.

English speakers, who account for about a fifth of Cameroon's population of 24 million, have complained for years at perceived discrimination in education, law and economic opportunities at the hands of the francophone majority.

On Monday, Human Rights Watch accused security forces of killing at least four civilians and raping one woman since mid-June in the northwest of the country. "These latest crimes add to a long string of abuses by Cameroonian security forces," said Lewis Mudge, Central Africa director at HRW. "Instead of seeing that justice is done, Cameroon's authorities deny that their forces are killing and raping people, so it is essential to remind them that the world is watching."

According to HRW, over the past three years Cameroon's Anglophone regions have been embroiled in a cycle of deadly violence that has claimed 2,000 lives and forced almost half a million people to leave their homes.