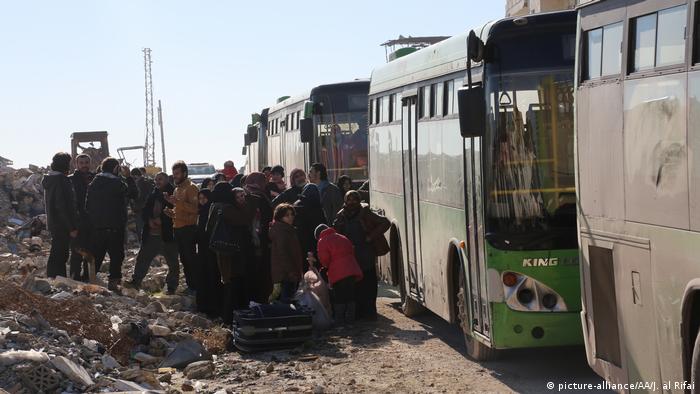 Syrian state agency SANA reported on Sunday that efforts were underway to "bring the remaining terrorists and their families out" of Aleppo, using the government's catchall term for rebel fighters. Members of the Red Crescent and the International Committee of the Red Cross were supervising the push as evacuation buses entered the rebel enclave, they added.

The deal was reached under the condition that evacuations would be carried out for pro-regime civilians leaving Foua and Kefraya, the two villages besieged by rebels in Idlib province.

However, at least five buses meant to carry out the sick and wounded from the two towns were set on fire. The Syrian Observatory for Human Rights reported that the al-Qaeda-affiliated Fatah al-Sham Front was responsible for the attack.

A rebel source told the AFP news agency that the evacuation of some 40,000 Aleppo civilians and rebels would be conducted in two phases.

"In a first step, half of the people besieged in Aleppo will leave, in parallel with the evacuation of 1,250 people from Foua," the representative said on condition of anonymity.

"In a second step, 1,250 people from Kefraya will leave in parallel with the evacuation of the remaining people in Aleppo," he added.

In contrast, state TV claimed that the deal would allow only 1,200 civilians to leave Aleppo in return for a similar number of people from the two villages. Only after this step is completed would more rebels and non-combatants be allowed to leave parallel to the evacuation in Idlib, it said.

In another complication, militiamen from the group previously known as the Nusra Front were preventing evacuation buses from entering the villages, according to the British-based Syrian Observatory for Human Rights. The buses were held up for over five hours, they said.

Two evacuation efforts fell through in Aleppo earlier this week.

Thousands of people gathered at an Aleppo square on Sunday hoping for an evacuation after several weeks of regime assault. Temperatures during plunged below freezing point during recent nights.

Aleppo resident Abu Omar said his four children were sick because of the cold.

"There's no more food or drinking water, and the situation is getting worse by the day," he told AFP.