"Linie 1" is among the most widely-performed German plays and the biggest success to date for Berlin's Grips Theater. Performances have been staged all over the world, including an adaptation in Yemen. 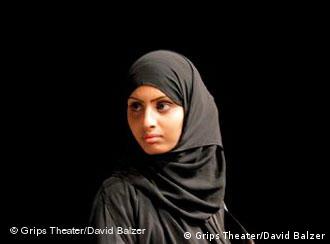 "Linie 1" has attracted viewers in Yemen, where theater doesn't have a big following

At a bus and taxi station in the center of Aden, an old woman fights with a drunken thief until a security officer intervenes. Then a street sweeper gets mixed up in the scuffle, while two boys cutting class try to scrounge up money for a round of gambling. On the edge of it all, a girl stands with a little suitcase in hand, not knowing where to turn.

"A show, a drama, a musical about living and surviving in the big city, about hope and adaptation, courage and self-deceit, to laugh at and cry about, to dream - and to reflect on ourselves." That's how the Grips Theater bills its "Linie 1," written by Volker Ludwig with music by Birger Heymann.

The realistic play follows a young runaway from the countryside, who comes to Berlin chasing after a rock star. But instead of finding her prince, she lingers in the subway where she is able to obverse the tension and diversity of life in the city.

The Grips Theater in Berlin has staged performances of "Linie 1" continuously since 1986. Many other theaters across the world have followed suit and hosted guest productions, as well as their own versions of the play.

Now, the piece will find a new audience in Yemen - with a few changes. The young Yemeni director Amr Jamal said he tweaked the plot to reflect contemporary issues in his country, noting that people want to come to the theater when they see part of themselves and their problems in the performance.

But there's a happy end nonetheless

Amr Jamal first heard of "Linie 1" by way of Guido Zebisch, director of the German Institute for Cooperation and Culture in Saana. Jamal was immediately intrigued both because he likes musicals and because the piece has such a clear connection to everyday people and problems.

Jamal's production, titled "Mak Nazl" or "Exit Please," takes place in Aden, but the subway is replaced by a shared taxi and the girl from the countryside by a young mother, who has already been the victim of what's referred to as a "tourist marriage."

According to Jamal, her story is common among rural families. "Wealthy men from other countries in the Gulf travel to rural Yemen, where many poor families live. They marry girls there for a brief period of time in order to have sex with them without violating their religious beliefs. But really it's a kind of prostitution." After a few nights together in a hotel, the men disappear, leaving the dishonored women behind.

Despite the plot's serious underpinnings, Amr Jamal and his theater group have developed the play into a lively story with a lot of situational comedy.

Director Amr Jamal adapted the play for a Yemeni audience

"In Yemen, there actually isn't a theater scene," said Zebisch,. Nevertheless, there are still people who want to perform and do. Increasingly, theater groups in Yemen are winning audiences, including Amr Jamal's troupe "Khaaled Aden."

Their production of "Mak Nazl" is financed in part by funds from the German Culture Weeks Yemen event, and so far the show has drawn 11,000 viewers. Women also take the stage in the performance, which is not a given in the predominantly Muslim country.

During their visit to Berlin, Khaaled Aden also enthused German audiences with their version of the play. The actors and actresses danced to catchy songs, and the original play's '80s soundtrack was replaced with southern Arabic sounds. The port city of Aden is also reflected in the play's colorful cast of young apartment-seekers, immigrants from Somalia, and parents whose adult children have left for England or the US.

And then there's the woman in the lead - while searching for the man who abandoned and dishonored her, she discovers a world beyond her village's borders and a new romance along the way.

A bus ride opens up new perspectives for the play's protagonist