In chaotic scenes, migrants and refugees trying to reach the EU have converged on a train station in Macedonia. Many are racing to reach Hungary before the country finishes building a fence to keep them out. 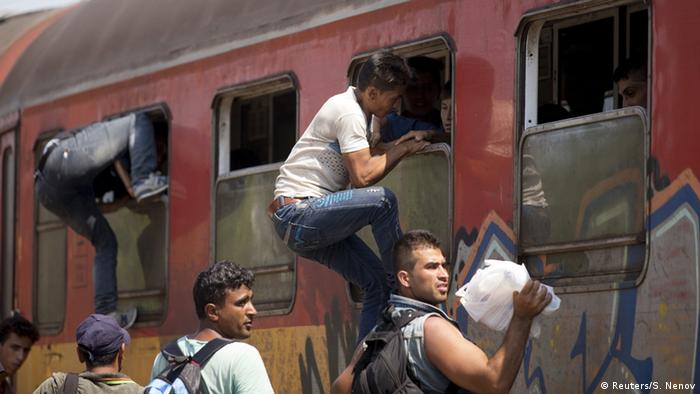 The southern Macedonian town of Gevgelija, on the border with Greece, on Saturday saw hundreds of people at the train station, making desperate attempts to climb aboard trains heading north.

The scene has been repeated over recent days as mainly Syrians, Afghans and Iraqis clambered on to wagons and squeezed through train windows at Gevgeljia, seen as one of the quickest – and perhaps cheapest, as it avoids the need to use people smugglers – ways to reach Serbia. From there, their destination is Hungary which is part of Europe's Schengen zone.

A Reuters reporter at the train station saw little sign of any official attempt to keep order on Friday and Saturday, save a handful of police officers, as thousands tried to board the two or three international trains which pass through each day.

Like the Greek island of Kos, Gevgelija has in recent weeks seen a rapid increase in the numbers of migrants – many who have traveled through Greece – arriving. In recent months about 1,000 people a day were crossing the border. In recent days it's been up to 2000. 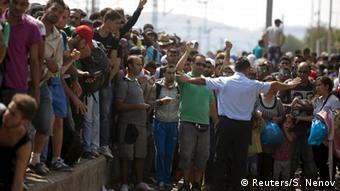 A police officer attempts crowd control on the platform

The Associated Press reports that tempers flared at the train ticket booth and blatform, while Reuters reported a "dangerous crush" as Serbia-bound trains pulled in.

Europe is facing a multi-pronged migration crisis as hundreds of thousands of people fleeing from war and poverty in Middle Eastern, Eastern European, African and Asian nations make perilous journeys to the European Union via the Balkans, the Mediterranean or Aegean Sea.

The Hungarian government is building a four-meter (13 foot) high fence, topped with razor wire, aimed at keeping migrants and refugees out. Gevgelija Mayor Ivan Frangov was quoted Friday as saying Macedonia and Serbia should consider building their own fences.

"This problem was not created by Macedonia or Gevgelija," he was quoted as saying by Serbian state news agency Tanjug, assing "The problem is arriving through an EU member state, and that's Greece."