Refugees and tourists in Budapest

Even with Hungary's border to Serbia now closed, thousands of refugees are still inside the country. Many are in Budapest, hoping they might still somehow catch a train headed for Austria or Germany. 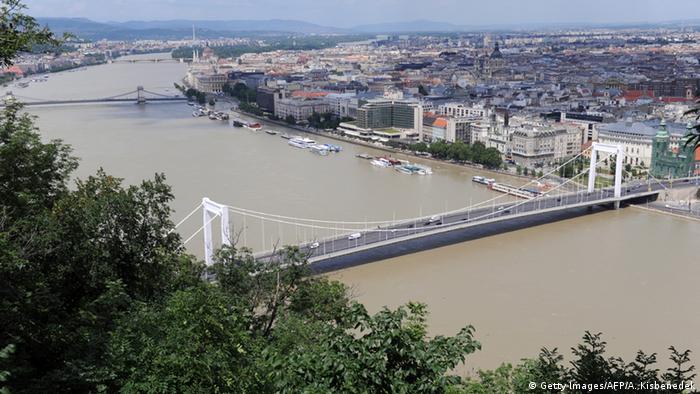 A little Hungarian girl lugs two gigantic teddy bears across the square in front of Budapest's Keleti Railway Station. They're so big she can't see around them and nearly stumbles over her own feet. Sousza is just five years old and chatters incessantly with her mother walking right behind her, carrying bags with dolls and a toy car sticking out. 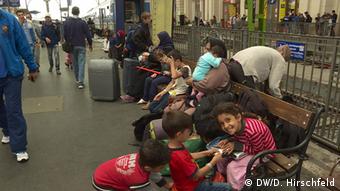 Many families don't know where to go next

The scene gives me pause for the second time today. Not long before, I'd seen nearly a hundred refugees barred from entering the station by Hungarian police. Many of them were holding up rail tickets. They'd heard a train was departing for Austria, maybe even continuing on to Germany. The police were unyielding: No one got through, ticket or not.

Some of the people here told me they'd been sitting in the station for days. Mohammad, a 25-year-old Syrian, had spent five days in the station's transit zone, two of them on a blanket in the open air along with over a thousand other refugees from Syria and Iraq. Someone came around and handed out flyers in Hungarian. But when he asked police officers to translate, they simply walked away. One of them even yelled at him. Now, says Mohammad, he just wants to get out of Hungary. 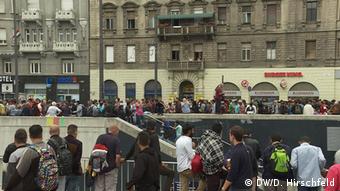 Hundreds of refugees at the Budapest Keleti station

A roller coaster of sympathy and rejection

Now, Sousza and her mother had made it through to the transit zone. They were looking to hand the toys over to an aid organization for distribution among the refugees. The mother tells me the television news had run images of the station and a camp on the border, showing refugees who had nothing more than the clothes on their backs.

That's when her daughter had started bagging toys. The five-year-old said she had enough dolls, but the children on TV had nothing. And now, they're here. But her mother wouldn't tell me their full names and didn't want them to be shown on camera. There are more than a few who speak resentfully of the refugees. And she didn't want any gossip. 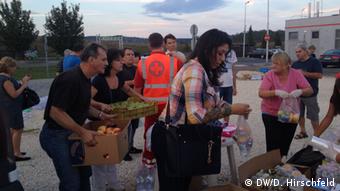 Help organizations are trying to support them

A staff member of an aid organization told me, every day people come from all over Budapest with groceries and drinks, blankets, clothes and toys. They want to help. Without this support, the organization would be fighting a losing battle here. On occasion, even tourists show up, usually with groceries they've bought somewhere on the spur of the moment - or they donate money. But he had the impression that the state and Viktor Orbán's government hardly cared about the refugees. And that was a disgrace. After all, these were people - people who had left behind everything they owned, fearing for their lives.

Even with the borders to Austria and Serbia now closed, he kept spotting people who'd arrive at the station from somewhere outside of the city, exchange the latest news with others here, and then disappear again, says the gentleman from the aid organization. And ever more women, men and children are setting out on their own from the refugee camps on the border, some of them trying to reach Budapest. There will be people here in need of help for a long time yet to come. 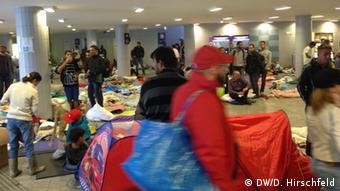 Refugees camping in the transit zone at the train station, hoping to travel on soon

Sousza ran over to two little girls sitting in front of a tent on the station's ground floor. She pressed her teddy bears into their arms. All three smiled ear to ear.

That evening at the hotel, I met Peter from Glasgow. He was on holiday with his wife in Budapest. They had just come in from Lake Balaton. They loved the hot springs in the Hungarian capital and Margaret Island. This was their third time here. But this year, they said, everything was different.

On their third day in Budapest, they told me, their taxi was blocked for some time while a long procession of raggedy people crossed the intersection. The taxi driver had made derogatory remarks. Only after that had the husband read on the internet about the refugees in Hungary. He and his wife had spontaneously bought sandwiches and handed them out. They just couldn't simply look away. But elsewhere, they'd hardly noticed a trace of what was happening at the major rail stations and the border. 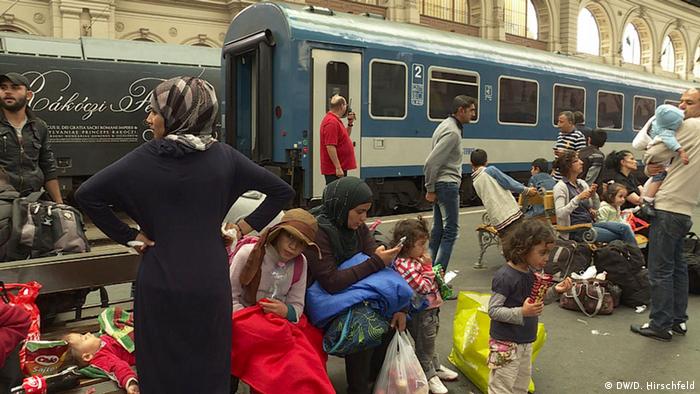 At the reception desk, Laszlo, a young man who spoke German quite well, told me "Yes, we have a problem at the station." And again later: "Actually, we've got a much bigger problem over there, in the government district." He meant Hungary's prime minister Viktor Orbán and his policies and the damage they had inflicted on his country's reputation - especially where the refugees were concerned. But he mustn't say things like that here so loudly, he admitted.

So far, he hadn't had any cancellations of hotel bookings because of all the refugees in town, says Laszlo. But he'd had worried callers asking if it was safe to travel to Budapest, if the trains were running, or if it would be better to fly. Even so, the refugee problem wasn't the main topic among the tourists. Unless they had to pass through the main station, they'd hardly even notice it. And then he had to get back to his job looking after the reception desk. I got the impression that the subject was beginning to make him uncomfortable after all. 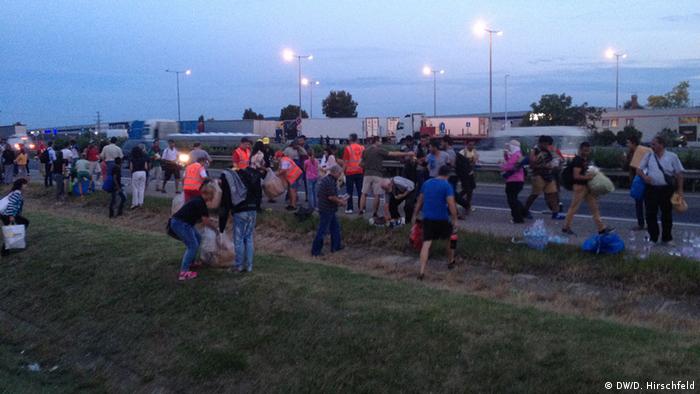 The next day, I came to a rest area on the highway at the edge of Budapest. The Red Cross was there, distributing water and bags of provisions to refugees passing by. The police were trying to keep the traffic tie-up from growing longer. I met motorists from Hungary, Austria and Germany, holiday-makers and business travelers. They griped about the traffic jam, and a few about the many refugees as well. But most people said the failure was on the part of the government.

Later, I inquired with the Budapest city government about how they intended to deal with the still large numbers of people in and around the station. The spaces around the station were being cleaned as often as possible, came the reply. When I asked if the situation as it was covered by the international media had had any effect on tourism, they wouldn't comment. But they said they'd look into it and call me back. The return call never came.