Soccer's big-wigs are grumbling about the "excessive" fee Real Madrid are prepared to pay to bring Cristiano Ronaldo to Spain. Fans and media critics are equally vocal about the world record transfer. 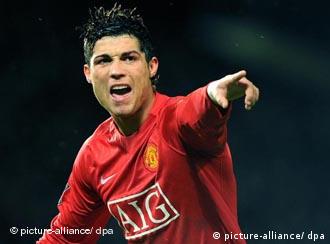 Cristiano Ronaldo: "Just put the money over there"

At a time when multi-national companies and global banks are going to the wall, 94 million euros ($131.2 million) may not save the world economy but it would make a big difference to most people's lives. For one ostentatious Spanish soccer club, the hope is that it will do more than just that.

The fee expected to be paid by Real Madrid for the services of Portuguese midfielder Cristiano Ronaldo from English champions Manchester United represents a sound investment with high, projected returns – both in profit and silverware. But not everybody is happy that Madrid President Florentino Perez seems to be on a one-man mission to stimulate the economy.

UEFA president Michel Platini has spoken out against the Ronaldo deal, calling it "excessive" at a time when the world is in the midst of a financial crisis.

"It is very puzzling at a time when football faces some of its worst ever financial challenges," Platini said in a statement to Reuters. "These transfers are a serious challenge to the idea of fair play and the concept of financial balance in our competitions," he added. 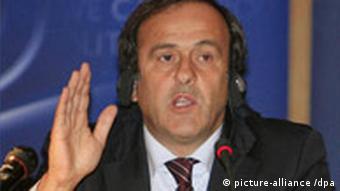 Platini led the chorus of complaints against excess

As well as being on the verge of buying the world player of the year, Perez and Real Madrid have already purchased Ronaldo's predecessor of that title, the Brazilian playmaker Kaka, for 68 million euros from AC Milan, breaking the world record fee for a player twice in a fortnight.

The chairman of the French League, Frederic Thiriez, has also voiced concern at the huge fees being touted for the world's best players. "Those amounts are neither understandable nor justifiable. Those excesses will lead the sport to the wall... I ask for a European financial regulator," he said in a statement.

This proposal has already been mulled over by EU sports ministers who discussed the possibility of a pan-European financial regulator for sport in November last year. They decided instead to press soccer's world ruling body FIFA and UEFA to introduce stricter financial rules for clubs and leagues.

UEFA is considering a number of measures to curb soccer's excesses including the tightening of financial regulation on excessive club debt; imposing stricter rules on player transfers, limiting the amount of revenue a club can spend on transfers and wages, and limiting the number of professional player contracts that can be issued in each country across Europe to reduce the size of squads. 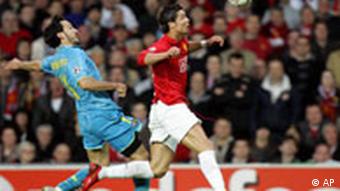 It isn't only the soccer big-wigs who are getting their shorts in a twist over the Ronaldo deal. Opinion polls in Ronaldo's likely destination, Spain, show that most Spaniards believe the fee is over-the-top.

To the question "do you think it was reasonable to pay this price?" some 75 percent of 10,000 Internet users who responded replied "no," one poll by the private radio station Cadena Ser said.

Three quarters of almost 100,000 Internet users who responded to a poll by the Marca newspaper also thought Ronaldo was "expensive."

The newspaper ABC said some 72 percent of those questioned in its survey found the amount "excessive."

Comments posted by Internet users on the site of the Madrid daily El Mundo were almost unanimously critical of the huge sum paid.

Among the comments were: "there's no sense in it," "it's immoral and an insult to the intelligence," and "it's completely insane." 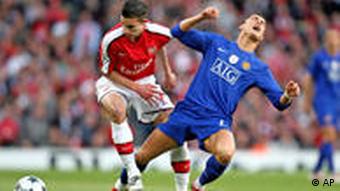 The sniper in the crowd was never identified

Back in England, where opinion on Ronaldo has been divided ever since he arrived as a precocious teenager in 2003, most commentators lamented the loss of the talent but not the man.

Commentators in the British press admitted it was difficult to decide whether they would miss Ronaldo or bid him good riddance for his tantrums and primadonna behavior.

"Poser, diva, faker and vulgar... but damn, he was the very best," headlined the Daily Mirror tabloid.

"United will not miss his attitude... But even if Sir Alex Ferguson is allowed to invest all the 80 million pounds from his sale in the purchase of new players, United will be a poorer team without Ronaldo," one writer said.

Most newspapers acknowledged that with Ronaldo making it clear that he wanted to move, there was no point keeping him in Manchester much longer.

But one Daily Mail commentator acknowledged: "United have traded their main man to a serious rival. There is no precedent for this, no moment in history to call upon and place the transfer of Cristiano Ronaldo in comforting context. 'Remember when we sold the best player in the world, and it made us stronger?' "No, because that never happens. Never has and never will."

The man himself appeared to be unfazed by all the comment and controversy. Ronaldo was in Hollywood celebrating his world record transfer by partying with celebrity heiress Paris Hilton.

The head of Germany's soccer league has called for a salary cap in professional soccer. (30.12.2008)

On the heels of a heartfelt speech about the need to maintain soccer's essential values, UEFA chief Michel Platini called for the creation of a police task force committed to fighting violence in soccer stadiums. (25.01.2008)

Sepp Blatter, the president of world soccer's governing body, FIFA, plans to challenge EU law and cap the number of foreigners in club teams. The move is strongly opposed by European soccer officials and top clubs. (06.10.2007)