A year ago large portions of Europe were battling torrential rainfalls and record flooding. This year they’re suffering from intense heat and an absence of rain. Experts say it could be a sign of more climate extremes. 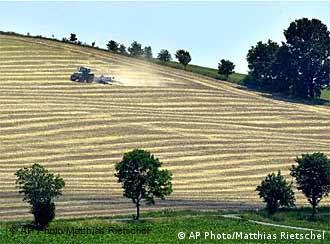 German farmers are harvesting more dust than wheat this summer.

From the Mediterranean to the North Sea, Europeans are complaining about the oven-like temperatures this summer. With the mercury rising 15 to 20 degrees above the usual seasonal highs, life is no longer a pleasant sunshiny day.

In Italy, for instance, six million households were temporarily out of electricity after numerous air conditioners and fans churning out cool breezes caused an overload on the power stations. In southern France, residents have been told to limit consumption of water and electricity in order to avoid a shortage. And farmers in eastern Germany are saying they’ll harvest little more than dust this year. Because of the unusually low rainfall, they’re expecting up to 80 percent fewer crops.

Climatologists are concerned about the unseasonable lack of rainfall. "The record temperatures are not really a problem," Helmut Malewski from the German Wetterdienst told news service dpa. "Much more problematic is the drought," the meteorologist added, pointing to the fact that water sources could start running dry. 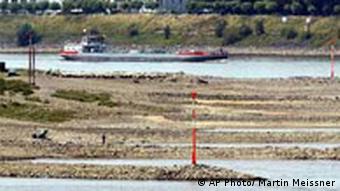 A barge navigates around sandbanks in the Rhine River near Duisburg on July 16, 2003, after extreme heat and drought caused the water to dry up.

Germany has received only about half it’s normal yearly rainfall. In many parts of the country the water level in rivers has reached its lowest level in a century. On parts of the Elbe and Danube, ship traffic has come to a complete halt. On the Rhine, barges can only travel with reduced loads.

In the eastern half of the country and in parts of Eastern Europe, not a single drop of rain has fallen in weeks. The ground is drying up and there’s a real danger of forest fires as vegetation becomes brittle. Franz Josef Feitner from the European agricultural association Copa-Cogeca told Deutsche Welle the drought has been particularly rough for farmers "in regions east of the line between Hamburg and Munich – including Germany’s neighbors Poland, Hungary and Slovakia."

Farmers with grain and cattle fodder have been especially hard hit this year. In some eastern regions the heat and drought have continued non-stop since May. Making matters worse, the spring started off with unusually cool, wet periods. "The whole year has really been a bad one. We have regions, where there was at first a surplus of rain and now a drought," Feitner said. 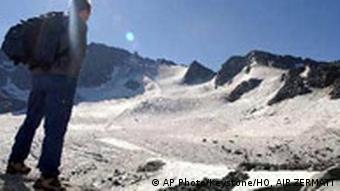 Matterhorn on July 15, 2003, where mountaineers are being evacuated after an avalanche. Geologists say the unusually warm weather is responsible for the rock slide since the permafrost is melting.

But the heat and dryness aren’t only a problem for agriculture’s ecological balance. In the Alps, the record temperatures have caused glaciers, such as the one on the Matterhorn, to start melting. As the layer of permafrost begins to recede, it exposes the barren rock face, which in turn becomes erosive and starts to break off. In Switzerland, avalanches on the mountain’s peak have wrecked havoc with flash floods further down in the valleys.

Climatologists, however, aren’t unanimous in their interpretation of the season’s unusual heat and dryness. Not all of them see the conditions as catastrophic warnings of a global warming trend. "It’s something that reoccurs every 15 to 20 years," Helmut Malewski from Germany’s Wetterdienst said. "It looks like we’re again in for another one of the so-called hottest summers of the century."

But Friedrich-Wilhelm Gerstengarbe, a climatologist at the Potsdam center for Climate Change Research thinks otherwise. "We can expect more dry spells like the current one, more flooding, more mild winters – something we don’t usually have – and cold winters will be more severe. We’ll see more of these extremes," he said in an interview with Deutsche Welle.

A study by the Potsdam institute projects weather trends up to the year 2055. Looking at probable changes to the climate around Berlin and Brandenburg, it concludes that hours of sunshine will increase and temperatures will rise.

For this summer at least, the warnings seem like they’ll hold true. Meteorologists in Germany are not anticipating any long-term relief in the heat wave. After a slight reprieve and a sprinkling of rain at the beginning of the week, temperatures are expected to rise again upwards of 30 degrees. That means Europe’s farmers will continue to wait for rain and everyone else will sweat it out.

Dealing With A Rising Disaster

DW-WORLD looks at the social, economic and political effects of the century's worst flood in Germany (Aug. 2003).

Armed with surveying equipment, satellite maps and historical postcards, German geologists are retracing diminishing Alpine glaciers. They want to document how climate change has affected their size and shape (July 18, 2002).