Read My Lips: A World Cup Mystery Unfolds | News and current affairs from Germany and around the world | DW | 11.07.2006

Forget about law or medicine. Forget about internet technologies and the stock market. If you want to be part of the latest, greatest high-profile profession, there's only one thing left for you to do. 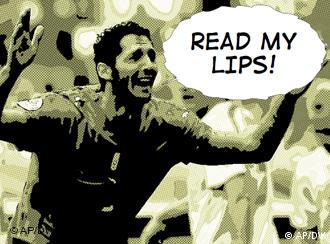 Mamma mia! I was just checking out Zizou's t-shirt.

Every respectable tabloid in the world employs them. Every royal wedding desperately needs them. And if FIFA was just a little smarter about getting rid of the millions it earns by selling video games and other global capitalist accoutrements, every World Cup would get one: a professional lip-reader.

How else would we know what sweet nothings royal couples whisper into each other's ears while standing before the altar? Or what the president of a country says to his dog on return from an important diplomatic mission? 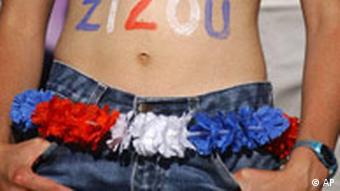 Zizou, the heart-breaker, has passionate and devoted fans

Ever since French soccer legend Zinedine Zidane, 34, floored Italian party boy Marco Materazzi with a headbutt to the chest in the second half of extra time in Sunday's World Cup final and was sent off the pitch with a red card -- depriving his country of a likely victory -- everybody has been preoccupied with a burning question: What did Materazzi say to provoke such a violent response?

And ever since that spectacular match, lip-readers around the world have been saying: "We know why."

The British daily The Times hired forensic and professional lip-reader Jessica Rees, whose talents have seen her summoned as an expert witness at criminal trials, to study a tape of Sunday's match. 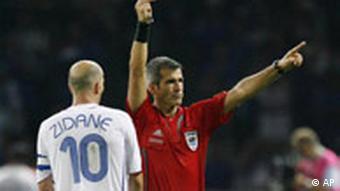 The truly fascinating thing about Ms. Rees is that she offers lip-reading services in several languages. She does not necessarily understand Italian, Russian, Arabic or Punjabi, but she can apparently create a phonetic transcript out of any foreign language she sees on a video tape. The transcript is then given to professional translators to be translated into English.

This process -- which some joyless skeptics would refer to as a way of making money while playing Chinese whispers or broken telephone -- was used in the analysis of the Zidane incident.

"After an exhaustive study of the match video, and with the help of an Italian translator, Rees claimed that Materazzi called Zidane 'the son of a terrorist whore' before adding 'so just f*** off' for good measure," the Times said.

Materazzi denied the insinuations on Monday.

"He turned toward me and scoffed at me, looking at me with super-arrogance, up and down, and said 'If you really want my shirt, you can have it later,'" the paper quoted Materazzi as saying. 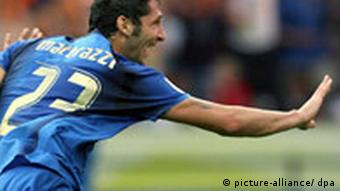 Materazzi learned not to touch other players' t-shirts ever again

"I certainly didn't call him a terrorist," Materazzi said. "I am ignorant; I don't even know what an Islamic terrorist is."

Even though soccer players are usually not known for being the most eloquent and erudite people out there, and even though "terrorist" is a multisyllabic word, it is hard to imagine that anybody who hasn't spent the last five years on the dark side of the moon would not have registered the t-word. 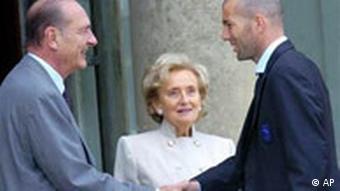 He moves in high circles: Zidane, right, with French President Chirac and his wife Bernadette

But let's not jump to conclusions. It is not only possible that Materazzi is partially aphasic, but also that British see-all-evil queen Jessica Rees got it wrong this time. Brazil's Globo television also hired a lip-reader who came to a very different conclusion. According to the bossa nova version of the story, Materazzi had called Zidane's sister Lila a "prostitute."

The whole lip-reading mania is severely misguided. While who said what is a matter of intense curiousity -- both in psychological terms and as the stuff that soap operas are made of -- it is also completely irrelevant because no verbal insult in this world could justify Zidane's physical response.

"You are a virtuoso, a genius of world football," French president Chirac told Zidane when he returned home on Monday. "You are also a man of heart, of commitment and of conviction. That is why France admires you and loves you."

Of course, while the French president was showering Zidane with florid compliments, he made sure to stand at a respectable distance from him. Nobody touched anybody's t-shirt at the Elysée Palace that day.

If we get lucky, we'll see at least one exciting Hollywood blockbuster thriller about the new most wanted profession in the word. From the director of "Lost in Translation" and producers of "The Interpreter," a new film about the mysterious shapes of words: "The Lip Reader." Coming soon to a theater near you.

Opinion: The Madness of King Zizou

It was to be the final glorious chapter of Zinedine Zidane's career. However, instead of triumph or dignified defeat, the last page ended with a stain. DW-WORLD.DE's Nick Amies reveals how a hero fell before his eyes. (July 10, 2006)

Is German soccer legend Franz Beckenbauer really a human being? Or is he merely a science fiction invention? He does seem capable of beaming himself to different galaxies at the speed of light. (June 21, 2006)

From expensive, second-hand chewing gum to strange Ferrari auctions, from friendly Berliners to the other tennis player named B. Becker, from curry fights to wheelchair cons, we've gathered a selection of our "From the Fringe" stories so you'll always be up to date on the quirkiest news items to come out of Germany.