Opinion: The Madness of King Zizou

It was to be the final glorious chapter of Zinedine Zidane's career. However, instead of triumph or dignified defeat, the last page ended with a stain. DW-WORLD.DE's Nick Amies reveals how a hero fell before his eyes. 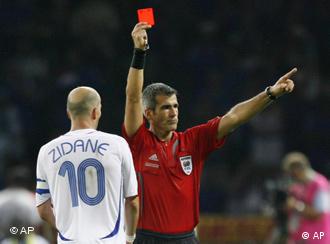 It's not often that your idols choose to fall from grace right in front of your eyes. Usually their descent comes long after they have left indelible golden marks in your life; often retold years later in grimy tabloid exposés.

Watching someone you perceive as God-like revealed as merely human and sadly fallible exposes the devoted follower to two truths: firstly, no gods walk among us and secondly, humans are essentially destructive beings.

Zinedine Zidane took to the pitch of the Olympiastadion in Berlin on Sunday night as if walking on a lake of mill pond stillness. If the great Frenchman had dispensed bread and fishes to the 69,000 spectators gathered there to watch his last game, few would have questioned it.

Even at the end of the match, had he trudged off in defeat, he would have still been the hero of the night; the player who had given his all, the man who had given France back their belief that they could once again be champions of the world and the man who had ended an illustrious career at the pinnacle of the game on soccer's biggest stage.

Instead, Zidane left the field as though the foul grip of a thousand wasted talents were attempting to drag him down into the bowels of soccer purgatory. 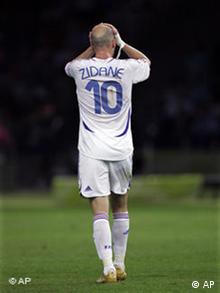 The image of Zidane passing the trophy he seemed destined to lift on his way out of the World Cup final in shame flashed in my mind as a modern sporting equivalent of the 1970s anti-war poster which featured a young soldier meeting his maker under the morally charged question "Why?".

Questions filled my head: Why did Zidane head-butt Marco Materazzi in the 110th minute of his last ever game, the World Cup final no less? Why, when the French looked the more assured side did Zidane choose to handicap his team in such a way? Why did the man whose head was so often used to think France out of problems use it to put his team in one of its most desperate situations? Why did he choose to end his career in such ignominious circumstances? Why did Zinedine Zidane choose to break a million hearts?

A broken heart. That's what it felt like. I started watching the final with no allegiance to either team, I just wanted the best player I had ever seen kick a ball end his career in dignity, with or without a second World Cup winners medal. France or Italy, it didn't matter to me. Zidane mattered.

Fall of Zidane the most painful moment of World Cup 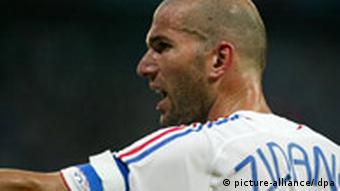 Zidane's final act was one of aggression

And that's why when the replay eventually showed his crime after what seemed like agonizing hours of tension, I felt hollow disbelief.

I had watched my own nation, England, crash out of the World Cup in cruel circumstances, but this moment of madness hurt even more. England losing on penalties seems to happen every two years. Zinedine Zidane leaving a World Cup final in disgrace is a one-off.

This irrational act betrayed Zidane the player and Zidane the man. It betrayed his fans. Those of us who wanted to see the final chapter of one of soccer's greatest stories end appropriately were denied this. He let himself down and he let us down. And he knew it. In the moment after the incident happened, you could see he regretted it. You could see that after the red mist cleared -- before the red card took its place -- he saw the painful reality of what was about to happen and what it would mean.

Of course, no-one feels as bad about what happened as Zinedine Zidane does. He let his country down and cost France the World Cup -- because, despite all the claims to the contrary, France are an infinitely better side with him than without him.

The betrayal of those who dream through their heroes 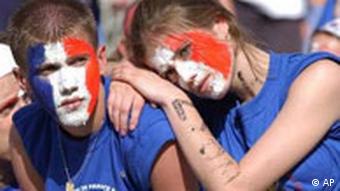 Soccer needs people like the one Zinedine Zidane so nearly was. His records will stand, his brilliance will remain undimmed in the memories of luminous performances, but Zizou had history in his hands and instead he blindly took the route to infamy.

These are rare opportunities in life; opportunities that so few of us ever get. To waste them so blatantly betrays all of us who dream and all those who live those dreams through people like Zinedine Zidane.

Italy won the World Cup on penalties Sunday after a dramatic final destined to be remembered for the sensational sending off for French captain Zinedine Zidane in his farewell match. (July 9, 2006)

Regardless of which team wins, Sunday's World Cup final will be about more than just claiming a soccer title. Both France and Italy are eager for domestic changes to accompany a win in Berlin. (July 9, 2006)

Zinedine Zidane: The Making of a Soccer Legend

It started in a Marseille ghetto before weaving its way through Europe, gathering riches on the way. The story of Zinedine Zidane's soccer journey could become the greatest ever told if it ends with a second World Cup. (July 9, 2006)